Ontario, Canada (Monday, 15 May, 2017): Sardar Jagmeet Singh made a historic bid on Monday to head the federal NDP party on the themes of equality and social Justice. If successful, he will be the first historic non-Caucasian to head a major federal party.

Mr. Singh, born in eastern Toronto and grew up in Newfoundland and Labrador and Windsor, Ontario said, he was picked on because of his name, skin and hair were different.
Growing up he faced a lot of bulling and often felt like he did not belong which motivated him to take up the cause as ‘incredibly unfair’ to the others like him.

These are the values that guide him and will continue to do so as leader. He inspires to be the progressive, social democratic leader that Canada has been looking for a while now. 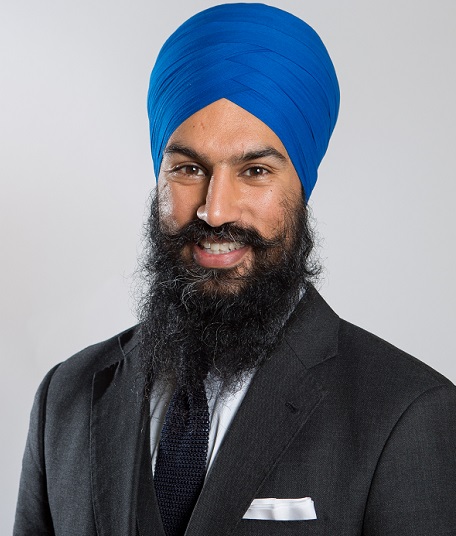 Mr. Singh was crowned deputy leader of Ontario NDP in 2015 and since he is the star politician for the common man and the representative of the unrepresented in Ontario and now working hard to be the true representative of the common man of the rest of Canada. He constantly fights again issues that matter to the man on the street and one such issue is that of Police Street checks know as Carding.

He is an amazing lawyer-turned politician, a young charismatic leader with a sense of dressing that challenges any fashion model or Bollywood celebrity, a mixed martial arts fighter and above all an avid social media user, the modern tool he uses aggressively to remain in touch with his constituents and work for them, with them 24/7.

Mr. Singh will roll out a policy platform wherein he wishes to bring up issues of inequality, climate change, indigenous reconciliation and overdue electoral reform.

He has led by example and is not shy of taking to task the current Prime Minister Justin Trudeau for his inaction on the above issues that he says breeds cynicism and fosters politics of fear and division which is alarmingly evident in France, U.K. and now of course in the United States, but is positive, collectively he will work with his colleagues to prevent it from entering Canada.

Currently the ruling liberals are falling short on their promises and electoral commitments. The conservatives are tripping over themselves to drive a wedge between Canadians. A perfect mix and time for a leader as charismatic and dynamic as Jagmeet to take on the reigns of a new emerging leader to steer the country out of confusion into the direction of progress and growth of Canada and Canadians as world leaders in the ever changing global and domestic needs.

It is worth noting that Mr. Singh has the ability to turn his disadvantage to his advantage and would be interesting to see how he does it, thereby revealing a distinct flavor in the federal politics of Canada.

His entry has already unleashed a renewed interest in Canadian politics that was missing since the times of charismatic former Prime Minister Jean Chretien.

He has (at the provincial level) and will now continue to break through a long-standing barrier at the federal level, one that really ought to have been shattered long ago, says Karl Belanger, Mulcair’s former principal secretary.

“Having somebody from a different ethnic background than what we have seen over the past 150 years is something that needs to be applauded.” Belanger said.

The NDP has had trouble connecting with ethnic minorities both in Ontario and at the federal level, said Queen’s University labor and history professor Christo Aivalis.

Mr. Singh’s leadership would send a strong signal to the party and to the Canadian public, Aivalis said.

“While some people fear that his turban, his name, his skin color … could hurt him in certain parts of Canada, others say that in big cities where the majority of seats are, he speaks to a new Canada.” Aivalis said.

Ontario NDP Leader Andrea Horwath said Monday that Mr. Singh has been a help to the provincial party.

“Jagmeet’s been an excellent member of our team,” she said. “He’s certainly done a lot of hard work to engage young people with our party, to engage folks in the broader GTA (Greater Toronto Area) with our party.”

Mr. Singh’s candidacy will undoubtedly bring a new dimension to the race, said Nathan Cullen, a veteran MP who sought the job in 2012 as one of several rivals to Mulcair.

“I think it will likely change the dynamic for the good.” Cullen said in an interview. “I’ve always been a fan, he’s a compelling speaker and has solid progressive roots and i think would be a challenge for (Prime Minister Justin) Trudeau.”

The next leadership debate is scheduled for Sudbury, Ontario, on May 28, 2017, stay tuned.