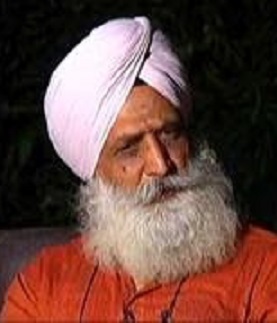 Known as a regional force representing the Sikh minority till the 1980s, the 90-odd year old Shiromani Akali Dal (SAD), now ruling Punjab in coalition with an unequal partner, the Bharatiya Janata Party (BJP), has, ironically, adopted an ultra-nationalistic posture to regain its lost ground.

At the 23 November Bathinda SAD rally— the first  among the five ones scheduled in the state — its president and Deputy Chief Minister Sukhbir Singh Badal announced that foreign forces from across the border, viz Pakistan, were “out to disturb the ‘hard-earned peace and harmony’ in Punjab . And  the Congress Party joining hands with Sikh radicals out to create a ‘Khalistan’ (Sikh homeland) are a threat to the unity and integrity of  India”.

The SAD leaders and workers have been suffering from some sort of social boycott in Punjab for more than a month as consequent to the Sikh protest against incidents of sacrilege of the scripture followed by police firing killing two protesters. 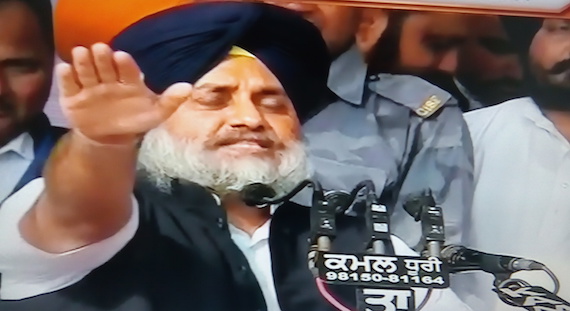 The main opposition, the Congress, too, joined the protests with Rahul Gandhi coming down to Punjab, visiting the places of sacrilege and meeting the aggrieved families,  expressing the party’s solidarity with the Sikhs who had come on the roads and put the state government to a grinding halt. A majority of the Sikhs, already  perturbed over the ruler’s  role in getting the Sikh religious body, the SGPC, and the Jathedar of the Akal Takht to exonerate the Dera Sirsa Chief Gurmeet ram Rahim Singh, of his act of  Sikh religious blasphemy, pointed an accusing finger on the Badal family in the sacrilege case. The Badals controls the SGPC and its appointee, the Akal Takht Jathedar, temporal authority among the Sikh.

Anger was already building up against the ruling Badals as a majority of people had been openly charged them with corruption, inefficiency and dictatorial behavior. The anger got further accentuated with the failure of the cotton crop and farmers’ unrest in the current second consecutive innings of the Badals’ rule. And the incidents of sacrilege led to an explosion of the people’s rage and the Sikhs blocked the roads and targeted Akali workers. Unprecedented Sikh fury flowed in the province for two weeks with Sikh preachers and religious people leading the show.

At that crucial juncture, some disgruntled Sikh leaders came out to fish in troubled waters and gave a hurried call for ‘Sarbat Khalsa’ ( an all Sikh community gathering) on November 10 . The call evoked a passionate response from the already agitated Sikhs who travelled in a large number to a venue situated at a stone’s throw distance from the Golden Temple, Amritsar. But that opportunistic political exercise by a few kept a majority of  organizations away and virtually the event  left no message and action program for the Sikhs barring announcing the name of an Akal Takht Jathedar, presently lodged in Delhi’s Tihar jail and serving a life sentence for the assassination of former chief minister Beant Singh, in the place of the incumbent one enjoying the ruling Badals’ patronage.

That spontaneous ‘Sarbat Khalsa’ gathering, in fact, proved a diversion to the ‘boycott momentum’ reaching to a peak against the Badals. The raising of sporadic slogans of ‘Khalistan’ by some fringe extremist elements at the gathering gave a chance to the Indian media, always looking for scary headlines, to brand it as an assemblage of Sikh radicals.

Taking a cue from the media reports, the Badals now adopted the same political narrative with which the Congress used to whip the former in the 1980s. A few Sikh Congress workers  joining “ Sarbat Khalsa’ in their personal capacity came handy for the SAD  to club the Punjab Congress party with the Sikh radicals demanding ‘Khalistan’. At the Bathinda rally, the SAD leaders attempted to create a fear psychosis among the people, particularly among the non-Sikh population, by reminding them that ‘separatists are raising their ugly head again to disturb peace in Punjab’.

Such Akalis’ accusations and mudslinging will rarely stick to the Congress,  a centrist party having a long history of peddling soft-Hindutva for building up a strong Indian nation-state. And the Congress will remain a strong opposition to the ruling SAD-BJP alliance in the coming 2017 assembly elections in Punjab. But the ruling Akalis will, certainly, succeed to some extent in further marginalizing the Sikh fringe element espousing ‘Khalistan’.

It is doubtful the ruling Akali Dal will be able to regain its earlier base among the rural areas dominated by the Sikh farmers and peasants. The farmers unions have already whipped up home the issue of failing agriculture, the mainstay of the rural economy with the Badals having no vision and model to offer for its salvage. The ‘development agenda’ strenuously propagated by the ruling coalition has failed to register any impact as the state is facing rising unemployment , further pauperizing of the unprivileged, mounting up the Punjab debt . And the state government is fast losing it capacity to meet day-to- day financial requirements. Now left with only the ‘security agenda’ option, the Badals are out to instill fear of those ‘bloody 1980s days’ among people and  project themselves as ‘saviors’ of ‘harmony and peace’ in Punjab.

But, that projected ‘Sadbhavana’ (harmony and peace) cannot be established by force as the Badals are doing. The so-called ‘ Sadbhavan rally’ was organized with open support of  official machinery, hundreds of buses mobilized to ferry participants even from adjoining Haryana and Rajasthan areas and preventive arrests were made to ensure resistance-free movement of the vehicles. In contrast to the ‘Sarbat Khalsa’, most of the participants mobilized for the rally were given inducement of money and liquor . And Dalit participants were promised the release of their held-up  MNREGA and pension payments.

Arrogance and insensitivity to the people’s problems flowed from the speeches of the Akali leaders at the rally with senior Badal (Chief Minister) harping on peace and harmony and his son (Deputy Chief Minister) throwing obnoxious and offensive challenges to his political opponents.

The next four planned rallies in coming fortnight will further expose the poverty of the ruling Akali Dal politics. Ironically, when regional forces are exerting themselves like that of the ‘Nitish-Laloo combine’ in Bihar , the SAD  has not  only lost its celebrated regional strength but also its claim to be the only political outfit of the Sikh minority in the country.

The recent rise of Hindu nationalism as an essential ingredient of the nation-state dispensation and envisioning of India as an emerging ‘super power’ has necessitated an excessive  use of western political weaponry –modernism and secularism – against the assertive minorities. As Indian state seems to be determined to ‘cut- to- size’ Muslims and Sikhs, the beleaguered minorities have, as a reaction, been raising their religio-cultural fences to preserve their distinct identities. Recent unprecedented uproar of the Sikhs over the sacrilege was an expression to that effect. But, instead of showing any sensibility towards the Sikh religious feelings, the Badals have redoubled their efforts and use of force to retain their tight grip over  Sikh institutions. And Sukhbir Badal’s recent posturing– which even Hindutva forces wary to adopt– calling the Sikh protesters as  ‘anti-nationals’ will, ultimately, rob the Badals of their political base among the Sikhs.

Amidst the ongoing turmoil in Punjab, the dormant religious forces with a strong grip on the Sikhs, are undergoing a churning process and might  throw up a viable alternative to the disgruntled Sikh leaders and power-drunk ruling  Akali Dal.