Over 225 UK Gurdwaras Back Restrictions on Indian Government Officials: FSO

London: On 7 January 2018 the Federation of Sikh Organisations (FSO), made up of ten Sikh organisations, announced the imposition of restrictions on official visits of Indian government officials in UK Gurdwaras.

The FSO said that it had set a target of 150 UK Gurdwaras and stated that the implementation would be formalised later in the month. They umbrella body of diaspora Sikh organisations in England clarified that since the 1984 Sikh Genocide restrictions already existed in many Gurdwaras. 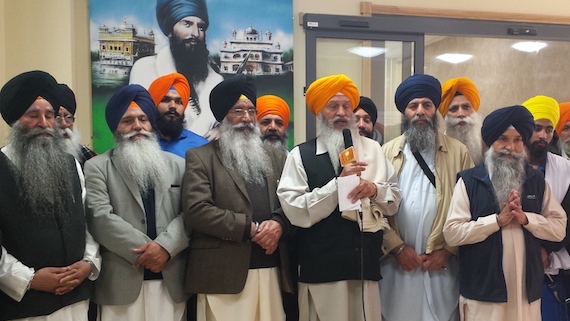 Federation of Sikh Organisations (FSO) is made up of ten UK based Sikh organisations. [FILE PHOTO – Image used for representational purpose only]

In a further development on the 31 January the Sikh Council UK following an Executive Committee meeting also put out an official statement supporting the restrictions in UK Gurdwaras.

In a statement issued on Tuesday (Feb. 13), the UK based Sikh bodies rejected the reports of Indian media which maintained that many Gurdwaras have backtracked from the announcement regarding imposition of restrictions on official visits of Indian officials.

A statement issued by the Sikh Federation UK reads:

It has been widely reported in the Indian media that the Indian authorities had compiled a “blacklist” of Gurdwara representatives in Canada where a list of relevant Gurdwaras had been published and they could not find members of management committees prepared to back Indian officials visiting Gurdwaras.

The Indian authorities have been shocked with the united and co-ordinated action by Sikhs across the globe and in desperation resorted to a number of under hand tactics that can now be exposed.
First came the repeated misinformation by the Indian authorities, their supporters and agents of a total ‘ban’ on Indian government officials from entering Gurdwaras to try and cause confusion.

Some who originally condemned the ‘ban’ were forced into a U-turn after they realised they had been hood winked by the false propaganda by the Indian authorities.

Then came efforts to show that Indian High Commission officials in London and some of its consulates were defying the restrictions.

On 6 January a day before the restrictions were discussed by the FSO an Indian High Commission official spoke at Guru Nanak Sikh Academy in Hayes. However, the Indian authorities claimed in a news item in the Tribune they visited a Gurdwara in Southall and showed a picture of Sri Guru Singh Sabha Southall and also stated they were set to visit another Gurdwara in the Midlands.

This fake news instigated by the Indian High Commission in London was designed to cause friction within the Sikh community. However, it backfired on the Indian authorities as it forced the Vice President of the Southall Gurdwara to initially confirm to the media no official had visited the Gurdwara and then telephone into a live TV programme to confirm that Southall Gurdwara stood united alongside other Gurdwaras and the Sikh Council UK in imposing restrictions.

On 7 January the Deputy High Commissioner attended an event at Sri Guru Ravidass Community Hall in Bedford and not the Midlands as claimed in the news item in the Tribune. A week later on 13 January Indian officials from the consulate in Cardiff visited Cardiff Gurdwara.

The Indian authorities have developed personal links with certain individuals in specific Gurdwaras and know the restrictions will never apply to all UK Gurdwaras or other venues the Gurdwara may be responsible for. UK Gurdwaras number around 270 in total.

However, the Indian authorities have been going to extreme lengths to show their defiance. For example, one very small Gurdwara was approached by one of the Indian consulates to allow them to do an Akhand Paath. They said they would also provide their own Kirtani Jatha and were willing to pay £2,000 a month for the next 12 months.

In a further embarrassing set back to the Indian authorities and following an article in the Times of India regarding a claim Gurdwaras in Bedford were not imposing restrictions Parmjit Singh Sohal, the General Secretary of Guru Gobind Singh Gurdwara Kempston (Bedfordshire) has written to the Sikh Federation (UK) and the Sikh Council (UK) and said: “Please note that a meeting of the executive committee of Guru Gobind Singh Gurdwara Kempston (Bedfordshire) was held on Thursday 8/2/2018. The whole executive committee unanimously supported the Sikh Council UK statement dated 31/1/2018.”

“Following the above meeting on Sunday 11/2/2018 at 10:45 in the presence of Guru Granth Sahib the whole Gurdwara Sangat was made aware of the Sikh Council UK statement and its background.”

“A resolution supporting the restrictions on Indian Government Officials from Gurdwara stages was unanimously passed by the whole Sangat.”

Bhai Amrik Singh, the Chair of the Sikh Federation (UK) said: “UK Gurdwaras have shown massive support for restrictions on Indian government officials if they visit Gurdwaras. Sikhs across the globe have shown their unity in standing up to the Indian authorities.”

“The misinformation, fake news, bribes and threats by the Indian authorities stand exposed and demonstrates their desperation.”

“In the UK we have a duty of care towards members of Gurdwara Management Committees and deliberately not published a list of Gurdwaras backing the restrictions. This has allowed us to outmanoeuvre and embarrass the Indian authorities, their supporters and agents who now look foolish.”