Jalandhar: In first ever interaction on the social media after the recent Punjab State assembly election and wining the Bolath Seat the leader of the Punjab Unit of Aam Adami Party (AAP) Sukhpal Singh Khair on Monday stated that the delay in projecting the CM candidate by AAP might be a major cause for the party’s dismal performance.

“While the Congress projected Capt Amarinder Singh as its CM candidate well in time, AAP remained double-minded on this issue. This created a doubt in the mind of the voters that someone from outside Punjab might get the chair,” he was seen as saying on his Facebook page. 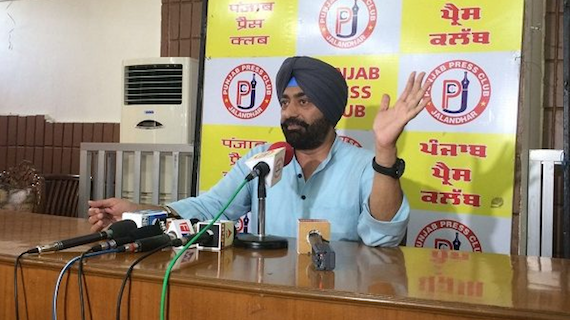 Sukhpal Singh Khair further suggested that its time that the party leadership should introspect the causes that lead to the election debacle for the party and should give a call to party workers and supporters as not to loose heart and get demoralised.

Furthermore he stated that the party would now prepare for a comeback in the 2019 Parliamentary elections, Khaira said it was now time for AAP to set a target for a win in 2019.

Whilst addressing a pres conference on Sunday he said that he would urge the Congress high command not to choose a “corrupt” man as the CM. “We accept the verdict and congratulate the Congress. But I want to tell Rahul Gandhi that Capt Aamrinder shouldn’t be the Chief Minister since he has many cases of corruption against him.”