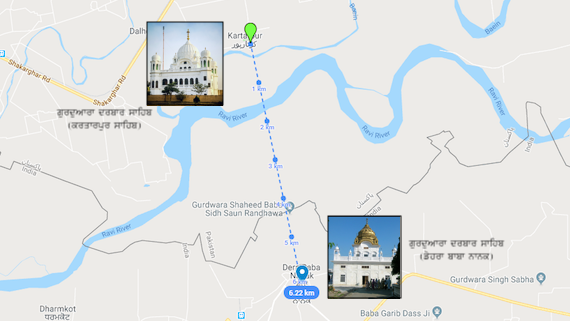 Notably, Gurdwara Kartarpur Sahib is located in West Punjab (in Pakistan) and is few kilo-meters away from Dera Baba Nanak in East Punjab (in India). The corridor was a long pending demand of the Sikh nation that was got separated from its historical and sacred places after the partition of Punjab in 1947.

Full text of the document as published by an Indian vernacular reads as follows:

AND NOW THE PARTIES AGREE AS FOLLOWS:

1. The objective of this agreement is to facilitate a visa-free travel of the pilgrims from India to Kartarpur Sahib.

2. In order to implement this agreement, the parties shall establish infrastructure in their respective territories, including facilitation centres and counters for running security checks and issuance of permits for the facilitation of pilgrims.

4. The Government of Pakistan may issue a permit to pilgrims desirous of paying visit to Kartarpur Sahib, subject to the following conditions:

a. The pilgrims must constitute a group of at least 15 people;

b. The pilgrims must carry Indian passports and individual security clearance certificates issued by the Government of India, in English, for the purpose of visiting Kartarpur Sahib.

c. The Government of India shall share with the Government of Pakistan details of the pilgrims and their respective security clearance certificates 3 days prior to their entry through the Kartarpur Corridor.

d. The permit shall only be issued for the purpose of visit to Kartarpur Sahib, subject to such further limitations as may be prescribed by the Government of Pakistan.

5. The number of permits granted may not be more than five-hundred (500) per day.

6. The Kartarpur Corridor shall remain open from 8 am to 5 pm daily.

7. The Government of Pakistan reserves the right to refuse entry into, reduce the period of stay or terminate the stay in its territory, of any pilgrim despite the grant of permit to such pilgrim, if It considers that the pilgrim is found undesirable for security or other purposes.

8. The agreement shall be implemented in accordance with the National laws of the parties.

10. This agreement does not affect the existing commitments under the agreements between the parties concerning border security.

11. All disputes arising from or in connection with the application or the interpretation of this agreement shall be amicably settled between the parties through the diplomatic channels.

12. This agreement may be amended, supplemented or modified by written mutual agreements of the parties.

13.This Agreement shall enter into force on the date of signatures by the parties and shall remain valid for a period of — years, unless terminated earlier. The parties may extend the duration of this agreement for any period by mutual consent In writing.

In Witness Whereof, the duly authorized representatives of the parties have signed this agreement at Islamabad on this day of _______________ in the English language.

On behalf of the Government of Islamic Republic of Pakistan

On behalf of the Government of Republic of India.

⊕ READ THIS NEWS IN GURMUKHI/PUNJABI: