New Delhi: Tall claims of India in which it had maintained that the state of Pakistan has been globally isolated on diplomatic platform, at that time fell flat when on Friday the pictures showing Palestinian ambassador to Pakistan, Waleed Abu Ali sharing the stage with Hafeez Saeed who is accused by India for 26/11 attacks on Mumbai, went viral on social media. 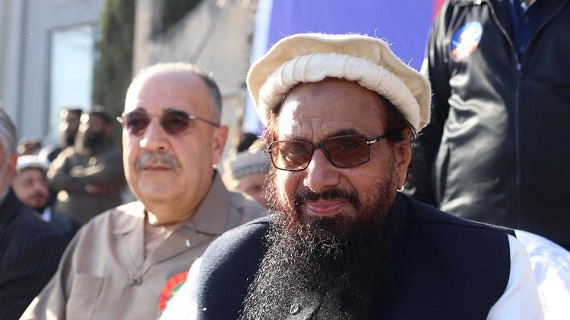 Walid Abu Ali (L), Palestine ambassador to Pakistan, seated next to Hafiz Saeed at a rally in Rawalpindi.(Photo: Twitter)

The Rally was reportedly called on by Difa-e-Pakistan Council at Liaqat Bagh in Rawalpindi a Pakistan based religious group and was reportedly addressed by Jammat-ud-Dawa (JuD) chief Hafiz Saeed. The rally was dubbed as ‘Islamic Submit’ and was called to garner support for Palestine and to defend Jerusalem from Israel.

The presence of the Palestinian envoy at a JuD rally is seen as set back for India- just last week India voted for a UNGA resolution against the US decision to recognise Jerusalem as the Israeli capital.

Moreover, India’s decision to back the resolution prompted a protest from Israel, a key ally in defence and security matters. New Delhi explained the vote by saying its position on Palestine is “independent and consistent” and “shaped by our views and interests, and not determined by any third country”, notes Hindustan Times (HT).

Meanwhile, the MEA officials in the backdrop of this incidence has reportedly said that a strongly worded demarche would be sent to the Palestinian government as well as the Palestinian authorities in New Delhi.

Update: Palestine on Saturday called back its envoy to Pakistan who had shared stage with Hafiz Sayeed. (Last Updated on Sunday, December 31, 2017 at 7:50 am IST)