Amritsar: The Shiromani Gurdwara Parbandhak Committee (SGPC) has shifted two of the Akal Takhat Panj Pyaras out of Punjab, while two others have been sent to Nankana Sahib and fifth Pyara has been on sick leave.

As per information Bhai Satnam Singh Khanda has been shifted to the Sikh Mission in Hapur (UP) and Bhai Satnam Singh (his name is also Satnam Singh) has been transferred to a similar mission in Delhi. Duo have reportedly refused to join their new posting. It is probably for the first time that any of the Panj Pyaras has refused to abide by the SGPC directions.

The two said they would protest the order and decide their future course once the remaining three (of the Panj Pyaras) resumed duty. 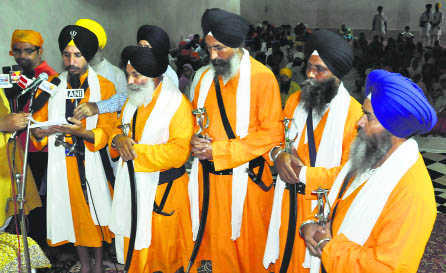 While Major Singh and Tarlok Singh are at the Nankana Sahib gurdwara in Pakistan for baptism to mark the gurpurb of Guru Nanak Dev (both would return on November 29), Mangal Singh is on sick leave.

It is notable that the Panj Pyare had taken notice of misdeeds of persons holding posts of Takhat Jathedars. They had directed the SGPC to relieve present Jathedars from their services.