Chandigarh: It is learnt that Panjab Digital Library (PDL) here on Thursday  unveiled an exhibit at the Seminar titled “Punjab in the Mid-Nineteenth Century: Fall of the Sikh Empire and Transition in Polity and Socio-Cultural Milieu (1839-1849)” organized by Sri Guru Gobind Singh College, Chandigarh. The Seminar is a two-day event but the exhibition wall will be kept intact for a month. 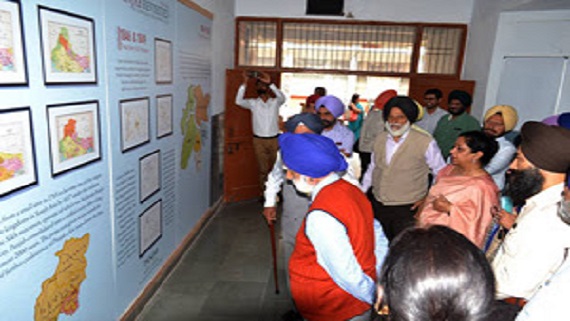 Using maps, the exhibit has been created in line with the theme of the Seminar that graphically portrays the consolidation of Panjab from 1765 through 1837, and depicts how Panjab faced the nemesis over the next decade. The further bifurcation of Panjab during the partition of India and later in 1966 has also been demonstrated as the consequence of what happened during the period of 200 years between 1765 and 1966.

The event was attended by hundreds of scholars on the first day. Dr Kehar Singh, Former Chairman, Punjab School Education Board, was the Chief Guest at the inaugural session which included a keynote address by Prof Sukhmani Kaur Riar, Former Chairperson of the Department of History, Panjab University Chandigarh. Prof Sukhdev Singh Sohal, Former Head, School of Social Sciences, Guru Nanak Dev University shared his views. S Gurdev Singh Brar and Col Jasmer Singh Bala, the President & the Secretary of the Sikh Educational Society, respectively, were present during the occasion. Dr Jyoti Lamba, Principal of the College was also present.

PDL had earlier associated with the Department of History of the SGGS College for an exhibition during their seminar on the theme of “Monuments of Punjab: A Study of Art and Architectural Heritage of Medieval Times in Present Punjab” in November 2017.