Amritsar:  In an effort to shame the Indian rulers for failing not only to provide justice to Nov 1984 killings of Sikhs but also to provide a resolution to the political conflict of Punjab, the Dal Khalsa and the SAD (Panch Pardani) sought the right to self-determination as the only solution to ensure that carnages like November 1984 do not recur again. Taking a significant step, both the organizations resolved not to allow Gaini Gurbachan Singh to address the Sikh Sangat from the pious seat of Akal Takhat on Bandi Chorr Divas.

Leaders of both the hardliner groups were speaking at a protest rally organized by Sikh Youth of Punjab (SYP) to commemorate 31st anniversary of Nov 1984 carnage. 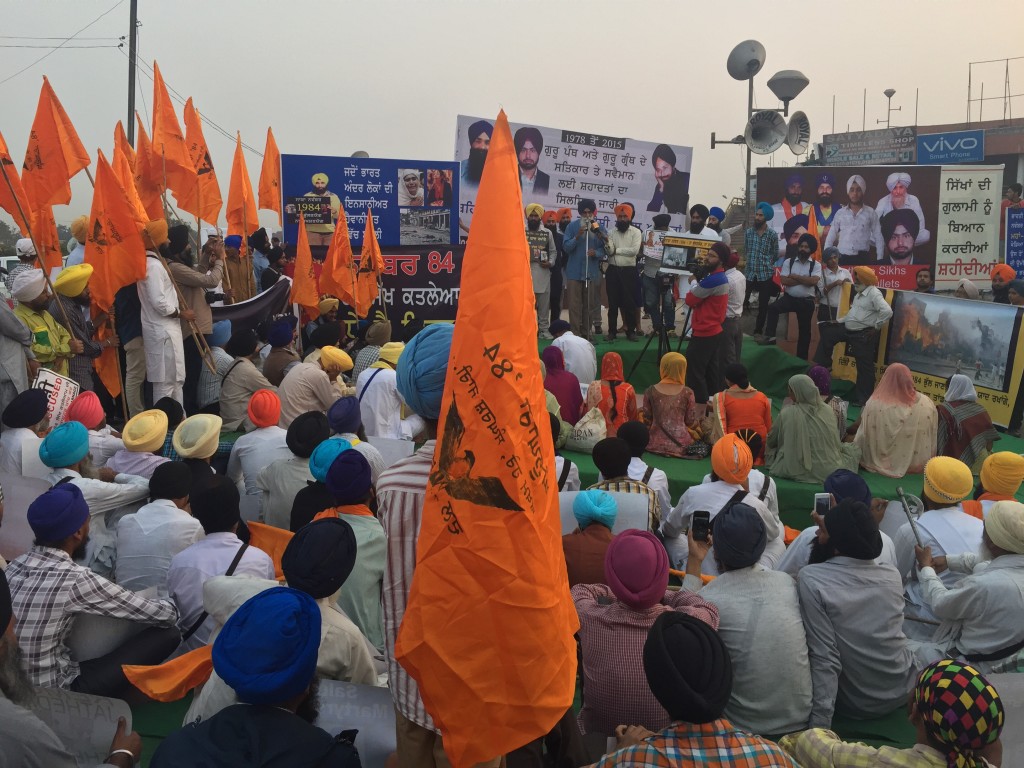 The youth led by its president Paramjit Singh Tanda stood in queue with placards, big banners and flags in hands for two hours at Bhandari bridge and then marched towards Akal Takhat to perform ardas in memory of those who were brutally killed in a what the organizers called “state sponsored and well planned killings of Sikhs in Delhi and elsewhere. The protesters were carrying placards in which it was written “Remove Jathedar’s as they are sinners’ and ‘No justice to victims who fell to police bullets”. They lit the candles to send the message to the ruling class, which they claimed were blinded by power and arrogance.

Referring to the news item in which UK police has apologized for their misconduct with Sikhs during recent demonstration, the leaders of both the groups said in India and Punjab we could never though of such humane approach and attitude from the police.  We had witnessed time and again the police brutality on protesters as was seen at Behbal Kalan, Bargari and other places in recent times.

Dal Khalsa head H S Dhami said thirty-one years have gone by and the killers of Sikhs had not been punished for their role in the genocide. He said the hopes for justice had died in Sikhs.

Speaking on the present crisis that has engulfed the Panjab due to the unfortunate incidents of sacrilege of Guru Granth Sahib, he said the root cause of the turmoil was the pardoning drama enacted by Badals and executed by Five Takhat Jathedar’s. He said they as representatives of Sikh Panth can’t tolerate disgraced person sitting on the august post of Jathedar. How can devout Sikhs allow such a disgraced person to defile the sanctity of the Takhat he said firmly?

He urged the youth and the Sikh Sangat to reach at Darbar Sahib in large numbers on Bandi Chorr Divas. Addressing the spirited gathering of the youth, he said in case the police on the instructions of Badals arrest them before Nov 11, “the responsibility would rest on the shoulders of you (youth) to perform your panthic duty without fear. He, however, was quick to add that youth should not take law into hands and all their conduct should be peaceful.

Seeking immediate dismissal of all Five Takhats Jathedars, the SAD (Panch Pardani) chief and member SGPC Kulbeer Singh Barapind said what may come we would oppose their continuity on the post. He said the Badals should be declared biggest traitors of Khalsa Panth  for denigration of Sikh religious institutions, ruining the traditions & honour of Akal Takhat and protecting the guilty police officials including the then DGP (S S Saini) for murder of two Sikhs at Behbal Kalan (Faridkot).

Castigating the present Indian government, which is working hard and overtime to convert India into a Hindu state, Dal Khalsa spokesperson Kanwar Pal Singh said the growing intolerance has reduced other nationalities to subservient slaves or second-class citizens. He strongly advocated referendum under UN to decide the destiny of people of Panjab.

Terming the handing over the cases of sacrilege to CBI as diversionary ploy to delay and deny justice, Advocate Harpal Singh Cheema chairman of Sikh Human Rights said “Sikh people have no faith in CBI as it has never delivered justice to the aggrieved community”. He lambasted Deputy CM and SIT chief for speaking lies to the people of Punjab by thumping their chests that they had succeeded in cracking the cases of sacrilege”. If the Home Minister (HM) and his police had cracked the sacrilege cases then why they were being referred to CBI now, he questioned.  He asked clarification from Sukhbir and demanded his resignation as state HM and head of SAD (Badal) for misleading the people and denting the image of Sikhs.

Referring to the news item in which UK police has apologized for their misconduct with Sikhs during recent demonstration, the leaders of both the groups said in India and Punjab we could never thought of such humane approach and attitude from the polic