Hoshiarpur, Punjab: Sikh leaders Bhai Harcharanjeet Singh Dhammi and Bhai Kulvir Singh Barapind today termed the constitution of the committee by Jathedars to look into the pre-scripted drama to exonerate Dera sacha Sauda chief Gurmit Ram Rahim Singh as a diversionary tactic to defuse anger and confuse the awakened Sikhs in their principled fight against faulty decisions by those occupying the highest offices of community.

Sikh leaders gave a clarion call to Sikh Diaspora to give befitting Panthic response to religio-political leadership running the affairs of Shiromani Akali Dal (Badal), SGPC and the Akal Takht. 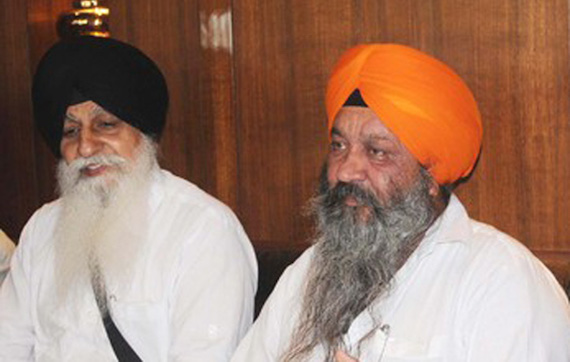 “What’s the utility of constituting the committee after issuing clean chit to head of heretical cult for his sacrilegious act? What relevance would the committee hold when large section of Sikhs have already rejected the so-called Pardon decision?” they wondered. They reminded how the other committee’s formed by SGPC on burning issues that includes settling Nanakshahi calendar row and fixing norms to appoint Takhat Jathedar’s has produced no results.

They took a dig at Badal Dal leadership for offering hollow and vague reasoning in pardoning Gurmit Ram Rahim. “It’s being argued that for the sake of peace and harmony in the region, it was necessary to end the lingering animosity between Sikhs and Sirsa dera”.

The heavy security cover provided to Takht Jathedars itself negates the theory of peace and harmony being propagated to justify the pardon decision. The only difference was that earlier the Sikh anger was targeted towards the Sirsa dera and now with a design it has been redirected towards Jathedars.

On Gurmeet Ram Rahim stating that he was willing to visit Darbar Sahib for peace, they said Darbar Sahib is the only religious shrine where anyone can visit to pay obeisance irrespective of religion, caste and creed. In this context, his offer (to visit Darbar Sahib) holds no water, said they. “He must come at Akal Takht in person and tender apology in clear words for his blasphemous act and pledge not to repeat the same in future”, they added.