Chandigarh: The issue of granting pardon to controversial dera Sirsa chief Gurmeet Ram Rahim has put ruling party Shiromani Akali Dal (Badal) in a fix as the ruling party is considered to be behind the announcement of pardon to dera chief by five Sikh Jathedars. In wake of changed political equations SAD (Badal) chief Sukhbir Badal reportedly held a meeting with party’s district presidents, MLAs and former MLAs on Oct. 01.

According to a news reported by Daily Ajit, a Punjabi vernacular, the issue of growing anger against Jathedars’ decision was discussed in the meeting. It was emphasised that the party leadership in towns and villages should free itself from prevailing confusion and take upcoming 2017 elections as a ‘mission’. 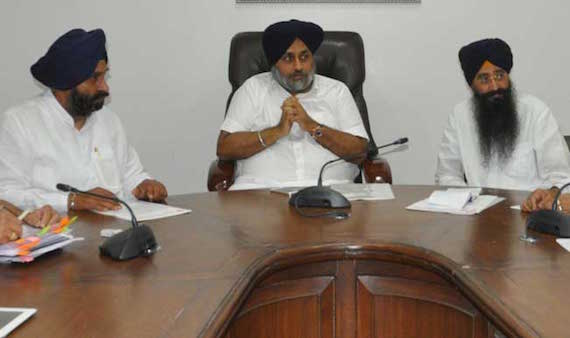 Daily Ajit quotes undisclosed sources to report that the issue of pardon to dera chief was not on agenda of this meeting, as the issue was to be discussed in a core-committee meeting of the ruling party but the district presidents raised concerns on this issued and asked their party chief to find an amicable solution at the earliest possible.

It is also reported that many senior leaders of SAD (Badal), who were present in the meeting said that ground-line leaders of their party too have objections against granting pardon to the dera chief. They reportedly said that it was turning difficult for them to face their own workers and local leaders.