Except few minor altercations polling in Patiala remained largely peaceful while Talwandi Sabo witnessed an incident of firing in the afternoon followed by a clash between Congress and Shiromani Akali Dal (Badal) supporters at Rama Mandi polling booth (IV) in Talwandi Sabo constituency in Bathinda district. 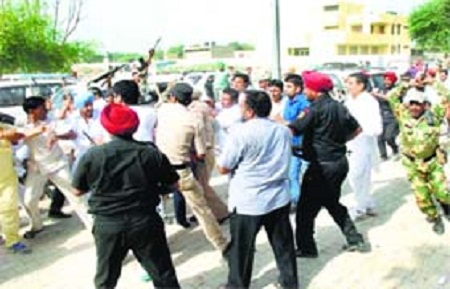 According to an English vernacular, The Tribune (TT), the police detained a Congress sarpanch at Dunewala village for more than two hours following an altercation with Badal Dal workers over booth capturing.

“SAD workers fired in air in the presence of Congress candidate Harminder Singh Jassi. Onlookers said that five to eight shots were fired. Congress workers reportedly retaliated and fired in the air. However, there were no reports of injury to anyone. Two youngsters are reported to have sustained injuries in a stone pelting” TT report reads.

Polling was immediately stopped at polling booths (Polling station 38-40, 41-42) of ward No 4 at Rama Mandi amidst heavy deployment of police force.

The Congress has lodged a complaint of bogus voting for 45 minutes before 9 am at booth No 107 of Khalsa School building in “Talwandi Sabo city.

While talking to Sikh Siyasat News (SSN) over phone she said that there were blatant violation of election norms, particularly in Talwandi Sabo and Rama Mandi.

She said that the security personnel helped the ruling party in casting bogus votes.