Allahabad: As per the media reports three people were killed after Patna bound Vasco De Gama express train derailed near Manikpur railway station in Uttar Pradesh early this morning. Thirteen coaches of the Vasco Da Gama-Patna Express derailed at 4.18 am after it left the Manikpur station. 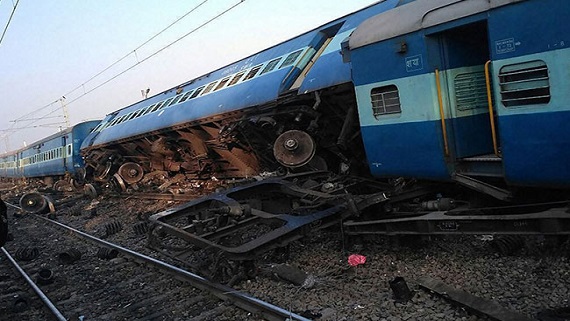 Union Minister for Railways Piyush Goyal has ordered an inquiry into the incident and announced a compensation of Rs. 5 lakh each to the family of the dead, Rs. 1 lakh for those with grevious injuries and Rs. 50,000 for the injured.

“Immediate rescue and relief operations started and an inquiry ordered into the derailment of Vasco Da Gama-Patna Express at Manikpur, UP. My sincere condolences to the families of the deceased,” reads the quote from a tweet of Railway minister Piyush Goyal.

The train derailed soon after leaving platform number 2 of the Manikpur Railway Station, about 250 km from Lucknow, officials were quoted saying by the media. The train hadn’t picked up speed which is why the casualties were not heavy. Chitrakoot Superintendent of Police Pratap Gopendra Singh reportedly said that a man and his six-year-old son from Bettiah district of Bihar died on the spot while the third person died at a hospital. Two of the injured are said to be serious.

Medical relief is being provided to the injured besides, “patients have been admitted to Manikpur and Chitrakoot Hospital and Railway Minister  has been closely monitoring the situation. Ashwani Lohani, railway board chairman, has been asked to rush to the spot,”said Anil Saxena, Railway spokesman while interacting with the NDTV.