Sacramento, USA: As patrons of the American Sikh Congressional Caucus, and members of the community the caucus represents, we urge the 42 U.S. representatives who belong to the caucus to recognize and represent the interests of the Sikh-American community by acknowledging the democratic protest of Californian Sikh Surat Singh Khalsa, a permanent resident of the United States who is on hunger-strike in Punjab, India to demand release of political prisoners.

Khalsa, like many Sikhs in the United States, came here as a refugee from political and religious persecution by the Indian State. He quit his job as a government teacher in June 1984 after the government launched an invasion of the Sikh Golden Temple that resulted in the deaths of thousands of innocent Sikh pilgrims. After the state-sponsored genocide against Sikhs expanded in November 1984, when the ruling party armed, funded, and guided the systematic slaughter of thousands of Sikh men, women, and children in the streets of India’s capital city, Khalsa began participating in peaceful protests against the government’s policy of genocide. He was wounded when police opened fire on a demonstration outside the Punjab Legislative Assembly in 1986 and subsequently decided to flee India for the United States. He came here legally, and his children and grandchildren became citizens, but he never forgot the atrocities committed against his fellow Sikhs. 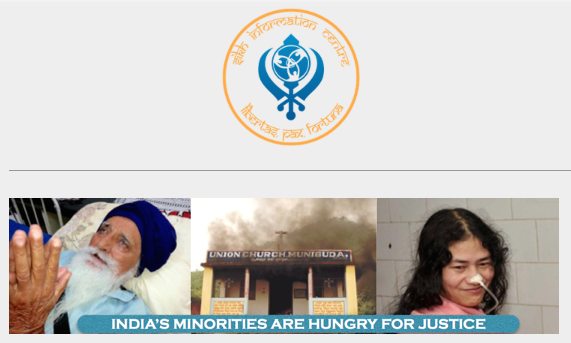 In January, Khalsa traveled to Punjab to begin a hunger-strike. His demand is for release of political prisoners who are mostly dissidents arrested for protesting the Sikh Genocide and related events. The prisoners have completed their sentences but are being denied release because of the political nature of their charges.

Since January 16, Khalsa has refused all food. He was arrested and force-fed for 74 days (February 8 to April 23), but after pressure from seven California congressional representatives, he was released without charges and has now been without sustenance for the past month. His family reports from India that he has lost the ability to walk or even talk. In his democratic protest by abstention, Khalsa joins the ranks of other human rights activists in India like Irom Sharmila and Bhagat Singh. His struggle was undertaken as a method of expressing peaceful dissent and exercising the natural human liberty to free expression and consequently we urge you to recognize his honorable choice.

Considering a caucus exists to pursue common legislative goals in service to a specific community, we insist that the most urgent priority of the American Sikh Congressional Caucus must be to speak for Surat Singh Khalsa. His struggle is mobilizing and inspiring the Sikh community all around the world and if the Sikh Caucus claims to represent the interests of the Sikh people, then it cannot continue to ignore this issue. We want the Sikh Caucus to stand up for their constituents who have brothers and sisters that are suffering in India and who are deeply concerned for the welfare of their global community, especially including U.S. permanent resident Surat Singh Khalsa. A number of Sikh Caucus members joined the bipartisan House Resolution 417 introduced in 2013 by Reps. Joe Pitts (R-PA) and Keith Ellison (D-MI), but the caucus unfortunately missed the opportunity to make the resolution part of its agenda despite broad national support for it from the Sikh-American community. We hope you can redeem this opportunity to speak for Surat Singh Khalsa.

We appeal to you speak out so that Khalsa’s self-sacrifice for the sake of the human rights of Sikhs, Muslims, Christians, and the oppressed classes of India will not go unrecognized. Please contact U.S. Secretary of State John Kerry immediately to request he appeal for the release of Indian political prisoners. We suggest that no other issue should take precedence for the Sikh Caucus since, after all, the name only fits if the caucus represents the interests of the community by whose name it calls itself.

Patrons of the Sikh Caucus is a nonpartisan group who want their congressional representatives to boldly speak out about Sikh issues of true interest to the Sikh-American community, both domestic and international and specifically including human rights issues in India, and who urge the Sikh Caucus to request these issues be adopted into the agendas of the House Foreign Affairs Committee and the Tom Lantos Human Rights Commission.