Amritsar: Dal Khalsa today blamed the SGPC and the SAD (Badal) for creating ruckus inside Golden Temple on Bandi Chor Divas by transporting persons who were brandishing swords with the ulterior motive to give bad name to those who assembled there to lodge their protest against the Jathedar.

Party head H S Dhami and spokesperson Kanwar Pal Singh said people brandishing swords were neither Dal Khalsa activists nor they were part of protesters as were being projected, rather they were meant to pick up fight with protesters. “It was Avtar Singh Makkar, another SGPC member owing allegiance to Badals and local Akali leader that brought scores of clean-shaven youth and also people in Nihang dress with naked swords to instigate clashes”, said they. “Makkar is in habit of pointing fingers towards others”. 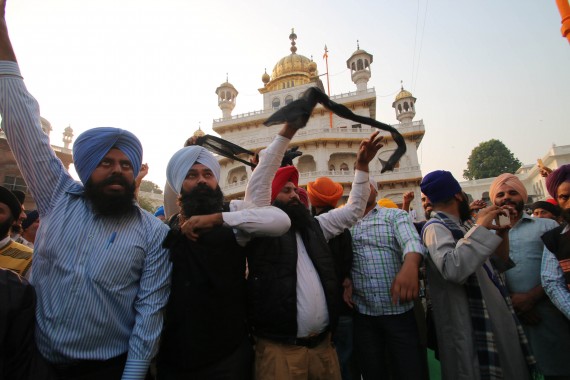 They rubbished all reports that their youth brandished swords and created panic inside Darbar Sahib. Our activists only waived black flags and raised slogans , while protesting against Gaini Gurbachan Singh during his address from Darshani Deori to mark the Bandi Chor Divas. “Our youth didn’t carried swords. Our protest was peaceful and no one forced us to leave the complex”, they clarified. Our motto was to register our resentment and anger as we believe that disgraced Jathedar has no moral authority to deliver sandesh.

They dared Makkar to come clean on those 18 clean-shaven youths who were caught by Sangat while taking drugs in the complex and handed over to police. Let Makkar to explain who brought them, what were their identity’s and why the police doesn’t booked them, they asked.

Condemning the arrest of Panthic leaders, Dhami said this was out of frustration. “It’s ironic that Badal government has deviated from its constitutional role and responsibility and instead viewed every Sikh as threat to Punjab’s peace”. ” Power-drunk Badals love to see every dissenting Sikh behind the bars”.