People will teach harsh lesson to Badals for their misrule: Dal Khalsa

Gurdaspur: Dal Khalsa has held the mainstream political parties fully responsible for allowing the drug problem to reach at alarming position, that has ruined the lives of hundreds of youngsters. To drive it’s point home, Dal Khalsa said contrary to the public utterances, all these power-drenched parties and their candidates will indulge in distribution of drugs and liqour to woo voters in upcoming assembly elections.

Referring to the cash crunch following demonetisation, party spokesperson Kanwar Pal Singh said there’s widespread resentment in public as the people were heavily suffering due to misrule and faulty decisions of the present dispensation. As it looks demonetisation will enable more corruption.

He said incidents of sacrilege has increased and reason is inept handling of such sensitive cases by the Incompetent ruling class. “The guilty and conspirators are still at large. Govt’s failure has irked the common man and they will teach a befitting lesson to Badals by unseating them”. 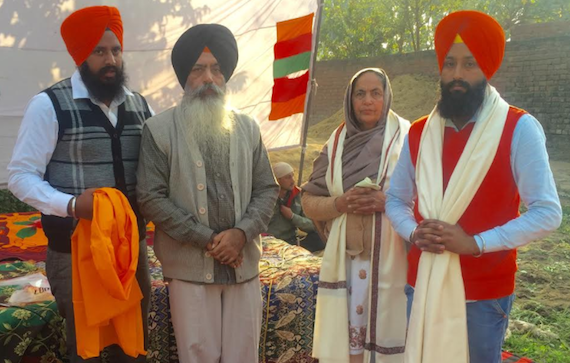 Dal Khalsa leader was speaking at a function organized at village Balaghan to observe the 24th death anniversary of Sukhdev Singh Balaghan, who was killed extra-judicially by security forces in 1992 after he was abducted by local police. The members of the pro-freedom group honoured the wife Simarjit Kaur and his son as a mark of respect to the deceased.

He said it’s a harsh fact that security forces all over the world were prone to committing excesses and rights violations against the civilians in their anti-militancy operations. He said the State is considered to brutal and dehumanized. The security forces by committing atrocities on citizens have compelled the youth to join militant ranks. We have numerous examples in Punjab, he remarked.

He urged the SGPC to place the pictures of those who were martyred during the Sikh struggle for rights and freedom in Sikh central museum.

President of Sikh Youth of Punjab Paramjit Singh Tanda termed the cutting of the hair of Sikh girl a third class student by private school management of Dinanagar as utterly non-sense and highly deplorable. He slammed the statement of SHO that the matter is closed that the police won’t arrest the culprit despite FIR against them on the pretext that victim don’t use the word Kaur with her. There is a clear case of cover-up and family had been either lured or pressurized not to persuade the case. Crime is a crime and guilty needs to be arrested and punished as per the Law.