Phagwara: A moolnivasi youth, who was critically injured in firing by Hindutva groups on the issue of renaming chowk in Phagwara on April 13, succumbed to his injuries at a hospital last night.

Yashwant alias Bobby (19) was critically injured as a bullet reprotedly fired by Hindutva activists had hit him in head during April 13 clash. 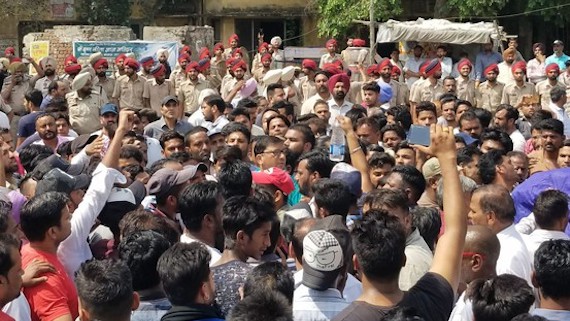 His body was sent to Phagwara on Sunday morning after postmortem by doctors under tight police security.

The leaders carried his stretcher on their shoulder for more than half-an-hour on Banga Road amid sloganeering and demanding immediate naming of Gol Chowk as Samvidhan Chowk and even placing a memorial of Bobby at the point, notes a report in The Tribune (TT).

A report by news agency UNI notes that more than 3000 police personnel are deployed in Phagwara city.

The Ludhiana-Jalandhar main road was also closed in wake of tensions at Phagwara.

The government has also suspended Mobile Internet and SMS services in Doaba region.