Phagwara: Shiv Sena and other Hindutva outfit leaders have tendered an apology for the attack on Muslims in Phagwara in July. They have also assured not to issue any statement or resort to a protest that would hurt any community in the future.

The apology was tendered in the presence of police officials and representatives of Muslim, Sikh and Dalit organizations on Tuesday evening. At the same time the Sikh, Muslim and Dalit representatives, including the Imam of the mosque outside which clash had taken place, said they regretted the damage to glass shield of the idol. 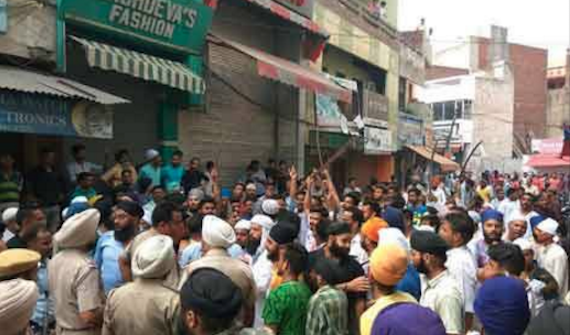 A violent clash had taken place on July 22 between Shiv Sena activists on one side and Muslims, Sikhs and Dalits on the other after Sena men attacked the Muslims when they were coming out of the mosque after offering prayers.

“We apologize for hurting religious sentiments of the Muslims brethren during our protests from July 20 to July 22, when abuses were hurled at them, their shops damaged and stones were pelted on them. We also assure that in the future we shall not issue any statements or protests that would hurt the religious sentiments of Muslims or any other community,” read out a Shiv Sena leader from written text and others agreed with it. Later the other side provided a copy of this text, read out by Shiv Sena leader, which was purportedly signed by nine right wing leaders and they also circulated it on social media.

According to Times of India (TOI), [a]fter the incident, Shiv Sena leaders were booked for attempt to murder, hurting religious sentiments and rioting and their police security was also downscaled or removed. Later a case was also registered against Sikh and Muslim activists for damage to a glass shield of an idol on the gate of a temple where Sena activists had entered when they were chased away and brick bats were exchanged between both sides.