Chandigarh: In a hardly four months old Punjab legislative assembly the main opposition Aam Adami Party (AAP) is already looking for the replacement of H S Phoolka as the leader of opposition in the 117 member state assembly. Earlier this week H S Phoolka submitted his resignation in order to carry on with his struggle with the cases of 1984 Sikh genocide survivors for which he is better known as the Delhi Bar Council barred him from law practice while also holding the position.

Popular faces of the party like former journalist Kawar Sandhu, three MLAs — chief whip Sukhpal Singh Khaira, and state unit’s vice chief Aman Arora are doing the rounds on the table. But opinion within is divided. Phoolka too suggested these names.

”Why from among just these three?”party’s Dirba MLA Harpal Singh Cheema reportedly asked and further suggested “One among the rest could also take over.” 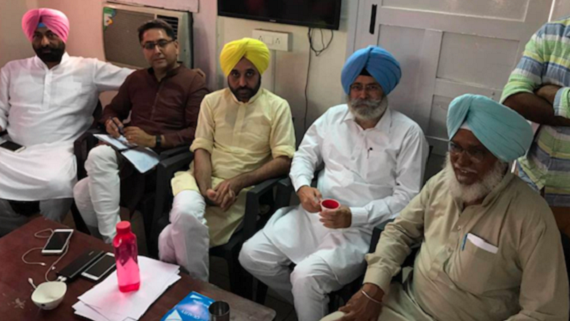 Media reports suggested that Jagdev Singh Kamalu, legislator from Maur, pitched for Khaira or Sandhu, suggesting that the top post be given to “someone experienced and senior”.

Furthermore, Sarabjeet Kaur Manuke, the party’s deputy leader in the Vidhan Sabha, purportedly said, “Someone who can follow the party’s ideology of transparency in a noncorrupt way for betterment of Punjab should be given the top post.”

In a reckoning statement state AAP women’s wing chief and Talwandi Sabo MLA Baljinder Kaur stated that“I am with the party’s decision.” Asked about her possibly taking over, she again added, “I leave that to the party.”

As reported by the media AAP state president Bhagwant Mann and Aman Arora were in Delhi on Monday to meet the leadership.

While talking to an English vernacular over phone Bhagwant Mann  said that Our MLAs will decide on a new incumbent. Earlier, too, it was the MLAs who elected me and Aman (as president and co-president). It’s not a timebound decision as we are not heading for an assembly session. My party will choose a suitable person.”

The party is also expected to decide on a refreshed organi sational structure in Punjab while a discussion on the post of legislative group leader was expected too, reports Hindustan Times (HT).