All Pictures & Portraits Of Ten Gurus Are Fictitious & Imaginary, Have No Religious Sanction, Says SYP

Hoshiarpur: Student wing of Dal Khalsa, the Sikh Youth of Punjab (SYP) today said that all available pictures of all Gurus are fake, fictitious and imaginary. 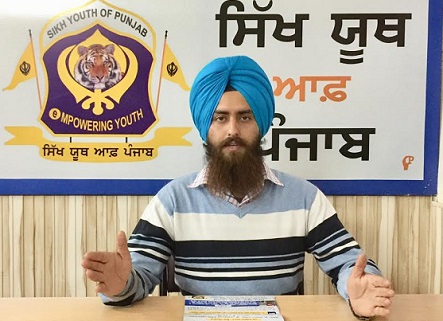 Referring to controversy over Congress government using “morphed” picture of Guru Gobind Singh Ji in its advertisement, Party head Paramjit Singh Mand and spokesperson Harjot Singh said two wrongs can’t make one right. They said both arguments by SAD (Badal) and counter arguments by Congress in their defense were basically against Sikh principles. They said using and worshiping picture of the Gurus was against Gurmat. All available pictures are imaginary and fictional hence, has no religious sanction.

Further, they emphasized that  Sikhs should worship Shabad-Guru (Guru’s Bani) and nothing else. “Sikhism prohibits idol-worship that includes pictures, paintings and portraits of Gurus in any form”. “Sikhs need to shun Manmat and follow Gurmat in both letter and spirit”.

Agreeing on the fact that portrayal of Sikh Gurus and their family members had been going on in pictorial form for very long now, they said let this be clear to one and all that pictorial portrayal was unwarranted and a deep failure of the community.

Moreover, to convey their point home, they quoted Sirdar Kapur Singh, professor of Sikhism, in which he mentioned that “When in 1610 some Sikhs asked for the permission of the Sixth Nanak to have a portrait of the Guru prepared, it was politely refused. And to the puzzled Sikhs, Bhai Gurdas, the evangelist, explained that the only portrait of the Guru is the Shabad of the Guru.