Sacramento, CA: South Asian diaspora will unite with community organizers and state legislators in California to rally at 3:30pm on May 22 outside the State Capitol Building in honor of Surat Singh Khalsa, a permanent resident of the United States who lives near Stockton, CA but has been on hunger-strike in Punjab, India since January 16 to demand release of political prisoners.

“On Friday, Surat Singh Khalsa will have been hungry for justice for 126 days,” says Bhajan Singh, who will speak at the rally. “Over the past four months, his family has faced political persecution in India while his state representatives at home were passing a resolution recognizing the Sikh Genocide that originally instigated his democratic protest. Indian jails are full of political prisoners arrested for peacefully dissenting from their government, including other hunger-strikers like Irom Sharmila of Manipur, and we will stand for their freedom.” 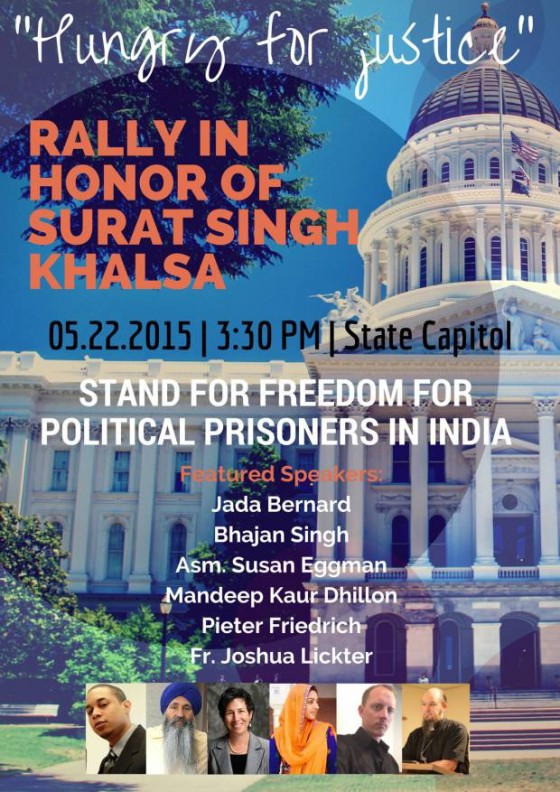 Khalsa immigrated to the United States in 1988 not long after being shot by police who opened fire, without provocation, on demonstrators outside the Punjab Legislative Assembly during a peaceful protest demanding redress for the 1984 Sikh Genocide. On March 10, the City of Stockton (home to the oldest Sikh-American community in the country) recognized the tragedy, stating in a resolution: “Sikhs suffered a genocide in June 1984, when the Indian government launched a full-scale military invasion of the Sikh Harmandir Sahib (also called the Golden Temple) while thousands of pilgrims thronged the area for an annual Sikh festival [and] Sikhs suffered another genocide in November 1984, when Sikh communities in the capital of India, New Delhi, and other areas, were systematically targeted for murder by roving bands headed by political party members and members of parliament, and thousands died in these attacks.” In April, the California State Legislature followed suit, unanimously passing a similar resolution.

“It’s said that injustice anywhere is a threat to justice everywhere, but the injustice is not just happening anywhere as it touches us right here at home in California,” remarks Pieter Friedrich, an activist who has spent the past several months advocating for Khalsa. “Our state benefited from a huge population of Sikh immigrants largely because of the genocide they suffered in India. Today, 31 years later, Californian Sikhs are enduring oppression in India for standing for human rights and so we will do our small part to stand for them here, in Sacramento, thousands of miles from India.”

Since March, Organization for Minorities of India (OFMI) has worked with Khalsa’s family to draw attention to his cause. On February 8, Khalsa was arrested by Indian police for being on hunger-strike and force-fed for 74 days. On February 26, his son Ravinderjit Singh Gogi (a U.S. citizen), was arrested for visiting his father, who was detained in police custody at a civil hospital. Gogi was jailed, held for two months without arraignment, and tortured in custody.

Seven California congressional representatives joined an April 15 letter to U.S. Secretary of State John Kerry asking him to “assist” Gogi and Khalsa. Both were released from Indian police custody within two weeks. Since then, Khalsa’s family in the U.S. has been appealing to U.S. congressional representatives to speak in honor of Khalsa’s struggle.

The rally begins at 3:30pm on Friday, May 22 on the West Steps of the California State Capitol at the corner of 10th St. and L St.