London: For over 30 years Sikhs have demonstrated numerous times outside the Indian High Commission in London and worked closely with the police to ensure they only need a minimum presence.  There has never been any violence, let alone arrests.  Several thousand Sikhs have protested in recent years and the police have closed roads to accommodate the large numbers highlighting human rights violations in India. 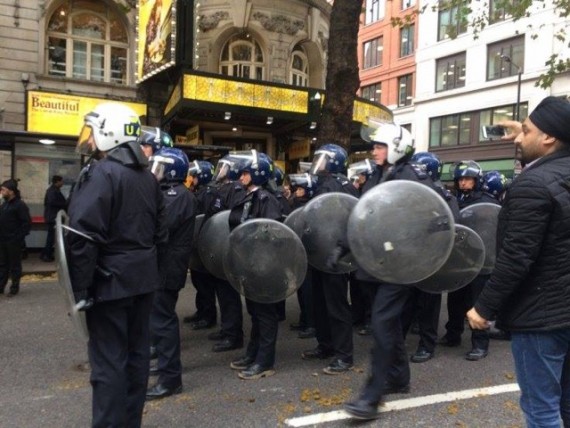 The Metropolitan Police contacted leading Sikh organisations on Monday 19 October to enquire about the peaceful sit in protest planned for 22 October and they were told the date, time and location.  They were also told that at least 500 protesters were expected.  With this sort of number of protesters expected, the number of coaches organised and advertised the police should have been better prepared to facilitate a peaceful protest.

Sikhs have been achieving much larger numbers in protests in recent times so the police normally arrange for barriers to be put up so only half the Aldwych, which is a one-way street is closed to traffic.  With the number of protesters who turned up they had little choice but to overflow into the road.
For some strange reason the police were ill-prepared.  The police should explain why they thought barriers were not necessary.  The fact the Indian High Commission was closed for the Indian holiday of Dussehra that marks the triumph of good over evil is no excuse as road closure was expected to be the main issue.
The sit in protest was planned in part to recreate the horrific scenes from a week ago when the Punjab Police used lethal force against thousands of peaceful Sikh protesters undertaking their morning prayers and exercising their democratic right to peacefully assemble and protest the desecration of Sri Guru Granth Sahib Ji, our Holy Scriptures and living Guru.
A week ago peaceful Sikh protesters in Punjab were beaten, dragged away and arrested. The police initially used batons to attack thousands of the peaceful protestors and then resorted to use of water cannons to try and disperse protesters.  Later they opened fire with live ammunition killing two unarmed Sikh protesters and injuring dozens of others.
What was planned in London was simply a sit in protest, but the Metropolitan Police clearly had other plans, including the use of extreme heavy handed tactics against men, women and children.  Whilst there were no barriers, riot police and horse mounted officers were quickly on the scene.
Even after horses marched into crowds of women and children Sikhs remained largely peaceful, but young Sikh men pushed the police lines back.  One officer then snatched a Sikh flag broke the stick holding it and threw them on the ground.  This was hugely disrespectful and provocative and designed to get a reaction. Police officers then forced their way into protesters to make arrests and stamped on some of those sitting down further aggravating the situation. 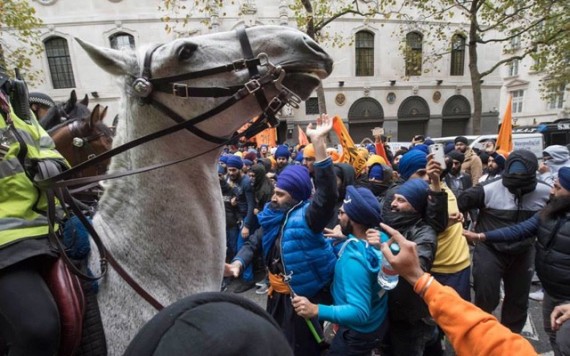 Several Sikhs liaised with Chief Inspector Nick Collins and it was agreed police officers would not attempt to remove any Sikh Kakkars (articles of faith).  However, Sikh turbans and Kirpans for forcibly removed without provocation.  This was a challenge to the honour of the Sikhs and hugely disrespectful.  Despite calls by community leaders to allow women and children to leave the 200 or so penned in by the police for two hours they did not allow this to happen for some time.

In another incident three young teenage girls and boys were pinned against a bus by 15 officers and were totally disrespected and had their Kirpans removed.  There was no need for this, especially after all were dispersing.  Some were upset that Chief inspector Nick Collins failed to take action having witnessed police aggression, assault and denial of human rights himself.
Many non-Sikh onlookers were astonished at the heavy handed reaction of the police to the peaceful Sikh protest.  Some agreed to give their views and have been filmed.
Some believe the provocation, show of force by the police and arrests was deliberate with the visit next month of the controversial Indian Prime Minister, Narendra Modi.  He makes his first trip to the UK following a 10-year ban and will be facing huge protests wherever he goes so the police may have been sending a message to protesters and appeasing the Indian authorities at the same time.