Chandigarh: Punjab Police today claimed to solve the case of beadbi of Guru Granth Sahib at Bargari village. Police have shown arrest of two persons and said that the accused identified as Rupinder Singh and Jaswinder Singh.

Disclosing this at Chandigarh this evening ADGP Law and Order Punjab IPS Sahota told media persons that both are brothers and belong to Panjgrain village.

The press conference was addressed by Punjab’s Deputy CM Mr. Sukhbir Badal who briefly introduced the police’ proclaimed breakthrough in this case and called on ADGP Mr. Iqbal Preet Singh Sahota to reveal the information about arrests in this case.

ADGP Sahota said that both have been in touch with some people in Australia and Dubai who “may have been behind” the incident. 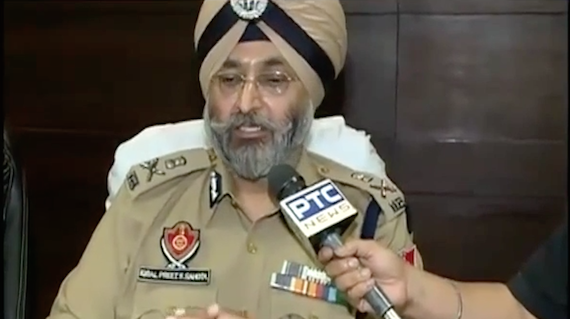 Talking to PTC News ADGP said that both brothers had telephonic conversation on October 15 and Rupinder Singh talked to some person in Australia on October 16.

Video recording of ADGP Iqbal Preet Singh Sahota’s Press Conference is being shared as follows for the information of readers/ viewers of the Sikh Siyasat News:

But there are some aspects of the case that were not touched by the ADGP. As per information collected by the Sikh Siyasat News (SSN) Angs of Guru Granth Sahib that were found from Bargari village were kept on a “Peera” during Kotkapura protests. These Angs were reportedly shifted to some place late evening of October 12 when Bhai Ranjit Singh Dhadrian and other Sikh pracharaks were first arrested by the police.

Sikh pracharaks, during their press conference on Oct. 13 (after they were released by the police) had said that the police were pressing them to hand over the Angs of Guru Granth Sahib taking a plea that it was required for progress in the case investigation.

SSN sources said that these Angs were later handed over to the police and the process was even video-graphed.

But ADGP Sahota, during his press conference today, did not make mention of this fact not did he clarify that whether the Angs said to be recovered from arrested persons were same Angs that were kept at Kotkapura Chowk during protest?

It is notable that according to a news reported by Daily Ajit on October 18, 2015 (Faridkot Edition at page number 9) the police had arrested Rupinder Singh’s father Darshan Singh, his brother Jaswinder Singh and his friends Gurlal Singh and Amandeep Singh. According to Daily Ajit they were thrashed by the police and were kept at Mehna police station (Moga). The news report also says that suspecting public protest the police admitted Rupinder Singh to Medical Collage Faridkot at around 8 am on Oct. 17. 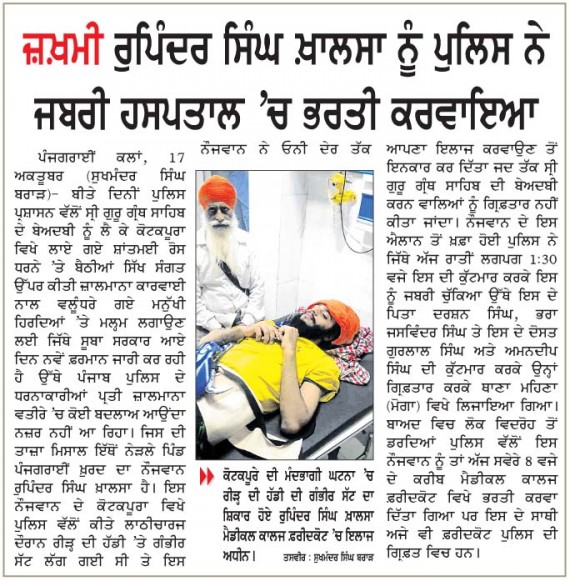 As per information Rupinder was later shifted to Apollo Hospital, Ludhiana. As per ADGP Sahota he was arrested today.