Amritsar, Punjab: Amritsar police has arrested another Sikh youth leader Paramjit Singh Mand in relation to a poster campaign by the Dal Khalsa. Mand was reportedly arrested by CIA staff Amritsar from his village Mand (near Mehta) based residence at around 6:30 am.

UPDATE: Paramjit Singh Mand was reportedly released by the police on Oct. 12 evening after interrogation. [Last updated on Oct. 12, 2015 at 23:12 IST].

Notably Punjab police has launched a massive crackdown against Sikh youth activists who were spearheading a poster campaign against Jathedars’ controversial decision to grant pardon to Dera Sauda Sirsa chief Gurmeet Ram Rahim for his 2007 blasphemous activities. As the pardon was announced after a secret meeting of Jathedars, without any consultation with various sections of the Sikh panth, the decision is rejected by majority of Sikh organizations and global Sikh community. 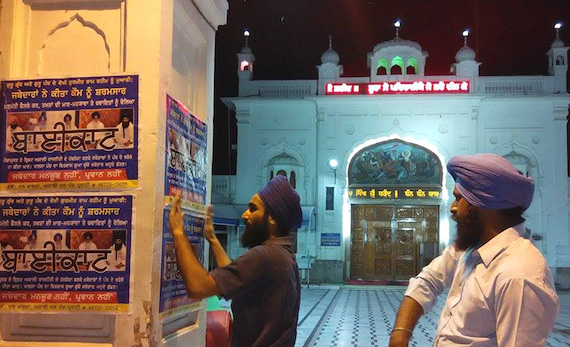 Sources said that the police is in search of other leaders of Sikh Youth of Punjab, that was conducting the concerned poster campaign launched by its parent body.

Paramjit Singh Mand is sixth person to be arrested in relation to the poster campaign as five other persons, who were arrested in past few days, have already been sent to the Amritsar jail under so-called preventive detention.

Many Sikh leaders, including SGPC members belonging to the ruling SAD (Badal) has condemned police offensive against Sikh activists and leaders.