It is notable that on the occasion of Vaisakhi, a police personnel had torn the posters of Sant Jarnail Singh Khalsa Bhindranwale in Kartarpur. This had triggered outrage amongst the Sikh sangat. Sikh activists, primarily the youth, had held a demonstration to protest against the Punjab police. Sikh youth had blocked road traffic over Jalandhar-Amritsar main highway at Kartarpur. 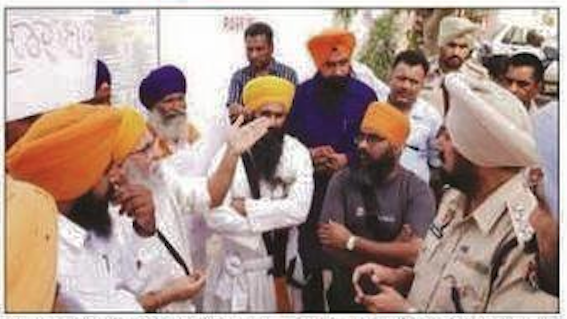 Baba Ajit Singh and others talking to the concern police officials

The blockage was lifted after the accused cops were suspended by the government.

Source said that the police had ‘quietly and secretly’ registered a case against 150 unknown persons for obstructing the road traffic. Tejinder Singh, Navjot Singh and Ranjit Singh are arrested in this case.

But the police has reportedly named these three persons in the case and they were presented before local magistrate.

DSP (Rural) Ranjit Singh Randhawa reportedly told media persons that the arrests were carried under directions of the higher authorities. Police has beefed up the security of Police Station and extra police force has reportedly been called at the local police station.