Ludhiana: More than thirty people, including 12 police personnel received injuries in a clash between villagers and the police at Kannian Hussaini village, near Sidhwan Bet. The police had reportedly gone to the village to assist the local administration in getting vacated the land allotted to the family of Sino-Indian war veteran Bhag Singh so that its possession could be handed over to his family.

Around 12 policemen (Hathur SHO Satnam Singh, two ASIs and some constables) and some women were among those injured in the clash. 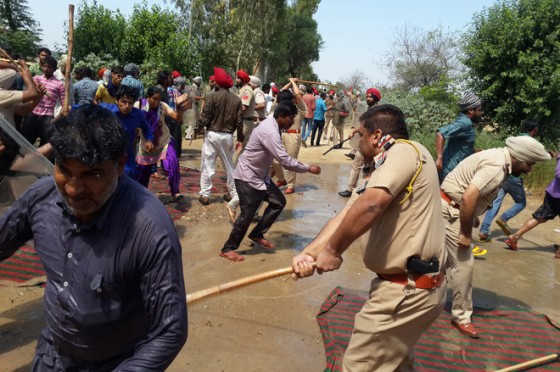 “The villagers allegedly attacked the police with sticks besides pelting them with stones. The police canecharged the protesters and used tear gas, rubber bullets and water cannons to disperse the mob. Over 10 villagers have been arrested in the case” notes The Tribune.

Earlier, a team of the local administration, lead by SDM Jagraon Rakesh Kumar Popli, arrived in the village to get the land vacated. A large number of villagers, led by the activists of various farmers’ and labourers’ unions, assembled there and gheraoed the team. Though the authorities tried to convince the villagers to cooperate and vacate the land peacefully, the villagers refused to give up, notes The Tribune.