Chandigarh: Around five hundred Sikh pracharaks led by Bhai Panthpreet Singh, Bhai Ranjit Singh Dhadrian, Giani Kewal Singh and others today held a march from Fatehgarh Sahib to Chandigarh but they were prevented from entering the capital city by the police.

Sikh pracharaks have started a sit-in on the road at Chandigarh-Punjab border. Senior SAD (Badal) leaders, including Parminder Singh Dhindsa and MP Prem Singh Chandumajra, held a meeting with the Sikh pracharaks. They were accompanied by SSP Mohali and SSP Chandigarh besides other civil and government officials.

Sikh Siyasat News (SSN) representatives present on the site of dharna said that Sikh pracharaks have put forward three demands before the government. 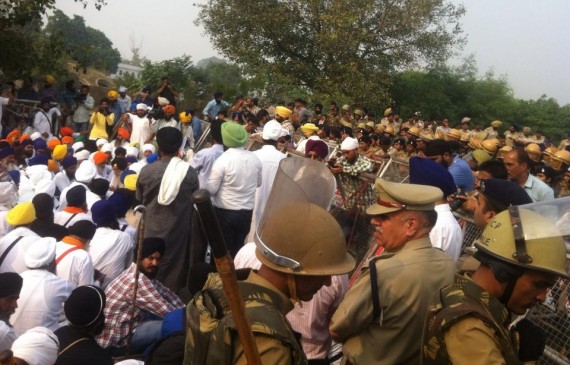 A view of Dharna at Chandigarh

Sikh pracharaks have demanded arrest of culprits responsible for beadbi of Guru Granth Sahib and full exposure of conspiracy behind incidents of beadbi of Guru Granth Sahib, withdrawal of cases against Rupinder Singh and Jaswinder Singh Panjgaraian and action against police personnel responsible for firing on Sikh sangat at Behbal Kalan in which two Sikhs were got killed.

The government representatives have reportedly left the dharna site and said that they would convey government’s response to the Sikh pracharaks shortly.