Ajnala/ Amritsar: A clash has reportedly taken place between Sikh sangat and the police took place at Ajnala. The police reportedly used force to prevent a march from Gurdwara Baba Deep Singh Shaheed (Ajnala) to Akal Takhat Sahib in Amritsar. The march was announced by various Sikh groups led by Damdami Taksal Ajnala.

As per information the police resorted to lathi-charge on the Sikh sangat and a clash broke out between the police and the Sikhs.

As per information Sikhs hurled stones at the Punjab police and a DSP named Tilak Raj sustained head injury. The police was able to disperse the gathering after heavy lathi-charge. 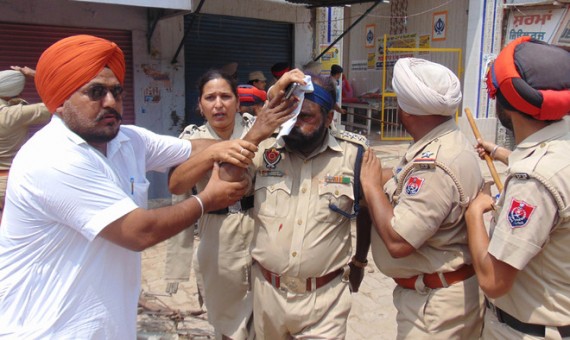 A case also registered against some persons in relation to today’s incident.

The police said that there was serious apprehension of disturbance to peace and they had orders to prevent the march at any cost.

On the other hand the Sikh groups alleged that the police was trying to snub their political struggle under the garb of alleged threats to law and order.

Bhai Amrik Singh Ajnala said that a peaceful march was announced by the Sikh sangat to show solidarity and support for the cause of Sikh political prisoners. He blamed to the police and civil administration of Ajnala for clash.

Meanwhile, there are reports that the police did not allow the Sikh groups to take out ‘support marches’ from various other places also.

Faridkot police is reported to have arrested members of some Sikh groups in their bid to prevent march from Faridkot to Hassanpur.