Amritsar: In an attempt to press upon the Takhat Jathedars to quit their post for lowering the honour of the Takhat, the Dal Khalsa and Akali Dal Panch Pardhani have launched a “poster war”.

Sikh youth activists today pasted posters in the city especially in various Gurdwara managed by the SGPC against persons holding posts of Jathedars of the Takhats quoting the recent controversial decision by them in exonerating the Sirsa dera head Gurmeet Ram Rahim .

The poster released by leaders of the Sikh groups that have recently announced unification process, carries photo of all Five Jathedar’s whose decision has generated lot of heat in the Panthic circles.

Sikh sangat seem to be in no mood to forgive the Jathedar’s as they believe their decision was not only politically motivated but also against the traditions and norms of the Takhat. In a poster, the Dal Khalsa has slammed Jathedar’s for surrendering their moral authority before the political masters (read Badals). 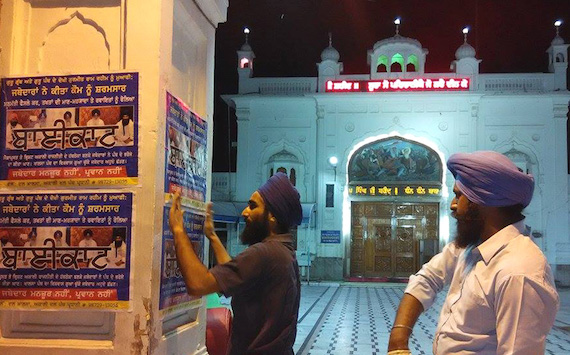 In an appeal to Sikh masses, the Sikh leaders have asked the Sikhs to boycott the Jathedar’s as they had pardoned the person who is anti-Guru and anti-Panth. It has also posed a question as to why Jathedars who had lost credibility and confidence of the community was still occupying the august seats. They also asked the Jathedar to either resign on their own or face protest in the form of boycott.

Speaking on behalf of aforesaid Sikh groups, Kanwarpal Singh said the posters were being despatched to different Gurdwaras in various cities for creating awareness among the masses on the matter.

He said the Shiromani Akali Dal (Badal) has forced the Jathedar’s to play fraud on community only to get the votes of dera premi’s in 2017 assembly elections.

“Such a party doesn’t deserve the votes of true Sikhs. This is what the Sikhs would have to understand and show the disgruntled Akalis their right place”. He said it’s ironic that the Jathedar’s recent decision has created bad blood among the Sikhs.