Press For Release of all Kashmiri Prisoners, Instead Few Selective Ones: Dal Khalsa to Six Opposition Parties

Jalandhar: Joining issue with six Opposition parties pressing for the immediate release of three former J & K chief ministers, the Dal Khalsa questioned them as to why they were not seeking release of all political prisoners including Hurriyat Conference chairman SAR Geelani, Mirwaiz Umar Farooq, Shah Faesal, Advocate Mian Qayoom and others. 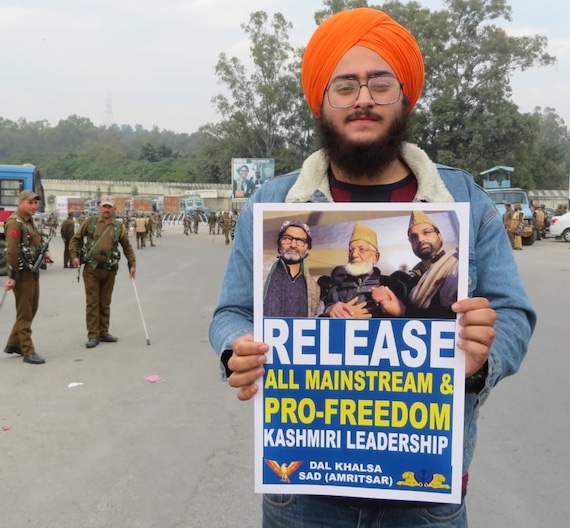 In a release issued on March 11, 2020 the Sikh organization termed the demand of these parties selective, indifferent and short of complete justice lacking the will to catch the bull by its horns.

Dal Khalsa’s Secretary for political affairs Kanwar Pal Singh said hundreds of Kashmiris have been languishing in jails across the country that includes leaders and activists from mainstream and pro-freedom camps since last seven months. Kashmiri nationalist leader Geelani was under indefinite detention and his health has worsened but unfortunately, the Indian civil society and international community is mum. Even Advocate Qayoom president of Jammu and Kashmir High Court Bar Association (HCBA) was reeling behind bars and his health has deteriorated but all pleas to release him has fallen into the deaf ears of Modi dispensation.

He further said the Indian state with its full might has converted the Kashmir into an open jail. “Foreign dignitaries were selectively chosen to visit the valley under the watchful eyes of Indian officials to give false impression that “all is normal in Kashmir”.

However, independent agencies and observers like Amnesty, Human Rights Watch and UNHRC were barred to visit the disturbed valley and assess the ground situation and interact with its “caged” population. Castigating the Modi government, he said even their delegation from Punjab were stopped at Kathua and not allowed to proceed to Srinagar on Dec 10 to commemorate World Human Rights Day.