Amritsar, Punjab: Sikh bodies – Dal Khalsa and Damdami Taksal have reportedly appealed to the Akal Takhat jathedar to come forward and halt the movie Nanak Shah Fakir, otherwise it will be too late and difficult to undo the damage that will be done to ethos and tenets of the Sikh faith.

The delegation submitted a memorandum asking the jathedar to take a proactive approach otherwise the community will have to come out on the streets. “You have no choice. The community has no choice. The movie maker had no choice –Nanak Shah Fakir cannot be released”, states the memo. 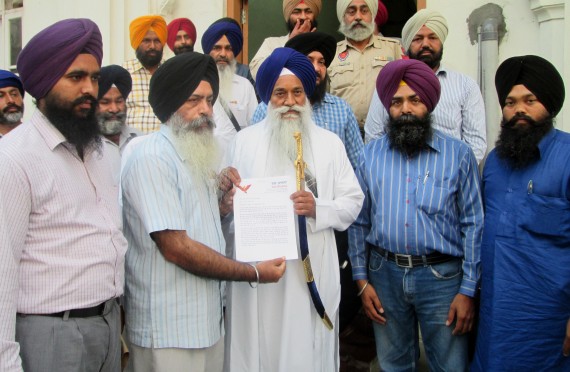 The delegation urged him to issue a stem and clear warning to all artists and film-makers that no movie with the Guru in human form will be tolerated.

Briefing the media Kanwar Pal Singh said the naivety and ignorance of religious leadership has landed the community in a piquant situation.. We conveyed our resentment to Jathedar as to why he went quietly to producer’s New Delhi house to watch the trailer of the movie and then kept mum.

He said the movie producer has gone on record that he has spent Rupees thirty-five crore to make the movie. “Just because he had spent so much money, he cannot be allowed to release the movie and commit blasphemy”, said he. Other’s who accompanied him, were Dr Manjinder Singh Jandi, Sarbjit Singh Ghuman, Nobeljit Singh and Gagandeep Singh.

Meanwhile, representatives of Damdami Taksal led by Ajaib Singh Abihasi also handed over the letter written by its head Baba Harnam Singh Khalsa to jathedar urging him to issue directives to producer to withdraw the film.

The letter stated that the Sikh tenets has been challenged by a member of the Sikh faith Harvinder Singh Sikka, who has produced a movie – in which Guru Nanak Sahib has been portrayed in human form by using computer technique. Baba Harnam Singh has categorically stated in his letter that movie -Nanak Shah Fakir must not be allowed to be released under any circumstances as this sinister trend will lead to dangerous consequences striking at the very root of the fundamentals of the Sikh religion.

In a statement, Baba Harnam Singh revealed that he along with Akal Takht jathedar and others have seen the trailer of the film at producer’s house in New Delhi. He, however, clarified that he disapproved the film and conveyed the same feeling to the Jathedar then only.

According to information, the movie Nanak Shah Fakir has not yet been cleared by the Central Board of Film Censorship. The delegation has asked the jathedar to direct the SGPC to take this up with the appropriate authorities and stop the release of the film.