Chandigarh: The National Gatka Association of India (NGAI) and World Gatka Federation (WGF) have strongly condemned the move by a private proprietor limited firm for getting registration of patent of trade mark of Sikh martial art and Gatka and said Gatka is an ancient traditional art inherited from Sikh Gurus and nobody has any right to get it patented. 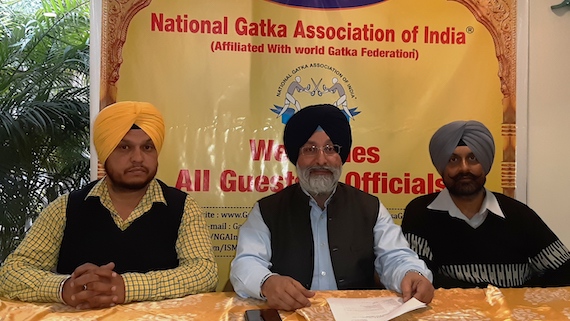 In a written statement (copy available with Sikh Siyasat News), President of National Gatka Association Harjeet Singh Grewal, Secretary Tejinder Singh Gill and Secretary of World Gatka Federation Baljeet Singh informed that a private firm registered under the Indian companies act has got patented two names – Gatka and Sikh martial art under trade mark act. Describing this act as a mockery of Sikh martial art and Gatka, this “nefarious motive” of Delhi based firm has challenged the entire Sikh community and its respected traditions.

Sternly warning this private firm both the apex Gatka organizations said purpose of owning trade mark of Gatka and Sikh martial art would be seen as capturing Sikh heritage, its martial art which would not be tolerated at any cost.

Grewal said this private firm should initiate process to cancel both the trade marks patented forthwith and tender apologize from the Sikh qaum otherwise legal action would be initiated against this firm for its blatant affront to Sikh heritage.

He made it clear that according to Indian Trade Mark Act and patent act only new technology/innovation or personal trade could be registered under these acts whereas Sikh martial art and Gatka are associated with ancient Sikh history, heritage and culture. “Gatka organizations would not allow anybody to own, sell or mortgage Sikh heritage or martial art to earn money through it”, he added.

Meanwhile, Gatka promoter Grewal also clarified that the National Gatka Association and World Gatka Federation have no relation with ‘World Gatka League’ being organized by this private limited firm in Delhi and would not be provided any recognition to this league. He said the Gatka players were being misled by this firm through the Gatka league.

He clarified that according to established rules and regulations, any national or international tournament could be organized only under the aegis of world sports federation or national sports association whereas this firm has not availed any approval from the World Gatka Federation or the National Gatka Association for organizing this league, which is a blatant violation of the prevalent National Sports Code and the Indian Olympic Charter implemented by the Central Government.

Grewal has asked all the Gatka players, referees and coaches to abstain from this league having no recognisation and the certificates distributed during such tournaments have no legality.