Srinagar: A day after Pakistan’s establishment made public its intentions to declare the Gilgit-Baltistan (PoK) region of Kashmir as its fifth province, the pro freedom leadership of Syed Ali Geelani, Mirwaiz Omer Farooq and Mohammad Yasin Malik in Kashmir in a joint statement on Friday while condemning this move  said that any proposal to declare Giglit Baltistan as fifth state of Pakistan is unacceptable, saying that Kashmir, Ladakh, Jammu, Azad Kashmir and Giglit Baltistan is a single entity.  The leadership added that the political destiny about Jammu Kashmir is yet to be decided.

The protest of the pro freedom leadership came after India while lodging its displeasure over this move alleged that it was done just to address China’s concerns about the unsettled status of Gilgit-Baltistan as  the USD 46 billion worth China-Pakistan Economic Corridor (CPEC) passes through this region. 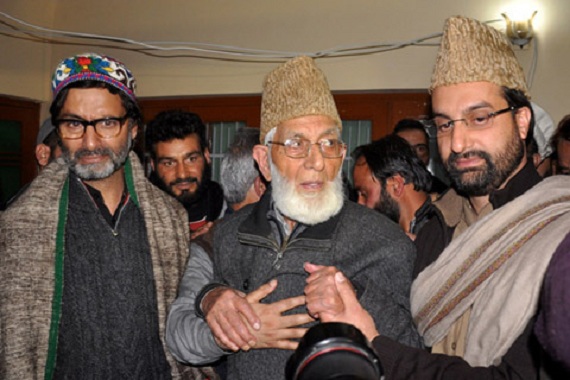 The Kashmiri leaders are of the view that  Pakistan is a prime party to Kashmir issue, and that the people in Jammu & Kashmir have always regarded and accepted the role of Pakistan as a party to the issue, however any step which may hamper the disputed status of Kashmir is unacceptable.

Joint leadership expressed their serious concern about proposals of declaring of Giglit Baltistan as fifth province of Pakistan and said that it will have damaging impact over the disputed status of state. They further said that Jammu Kashmir is long standing issue in international forums and world community has agreed to decide its political destiny through resolutions acknowledged by UNO.

Moreover the leadership said that unless & until the people of state are provided an opportunity to decide the future course of state through referendum, no division, alteration and changes are acceptable. Rejecting any idea of merging of its part or division of state, the leaders said that both India and Pakistan have no authority or right to alter the geographical status of state.

While confronting the statement issued by  India’s ministry for foreign affairs in which it purportedly stated that “the entire state of Jammu and Kashmir acceded to India in 1947. It has been, is and will always be an integral part of India. A part of Jammu and Kashmir has been under illegal occupation of Pakistan.” The Kashmiri leaders whilst rejecting  this claim of Indian authorities  said that India has forcibly occupied the state and hence have no right to claim or issue ridiculous statements.Referring to claims propounded by Indian authorities and terming it a brazen lie, leadership rejected their claim about political status of Jammu Kashmir.

Furthermore, the pro freedom leaders has asked the Pakistani leadership to show wisdom and desist from such steps which may hamper the political and geographical position of Jammu & Kashmir.