Srinagar: In a joint statement Syed Ali Geelani, Mirwaiz Dr Umar Farooq and Mohammad Yasin Malik on Wednesday (Jan. 24) said that India State has no right to celebrate its Republican day in Kashmir as they have occupied the state with its military might and its presence has tormented all ethics.

In a statement issued to press, pro-freedom Kashmiri leadership appealed people to observe 26th January as a “black day” and boycott all celebrations and asserted that India claims to be a large democracy in world but virtually stand exposed in Jammu and Kashmir and is trampling all basic and fundamental rights since last seven decades. 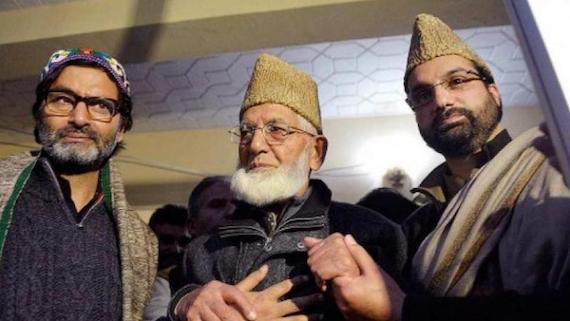 Referring to human rights abuses in Jammu and Kashmir, the Joint Resistance Leadership said that abuses range from mass killings, enforced disappearances, torture, rape and sexual abuse to political repression and suppression of freedom of speech and maintained that six lakh people were killed, ten thousand disappeared in forces custody and hundreds of women molested.

“We have no animosity with India or its people and they have every right to celebrate republican day within its states but despite their being rhetoric about democracy they have no ethical or constitutional right to celebrate this in Jammu and Kashmir as our democratic rights have been smashed and trampled”, read the statement.

The joint leadership while referring to UN charter said that they guarantee the basic and fundamental rights and this institution has obviously called to seek the people’s verdict through plebiscite & has asked to ascertain their wish with regards to political destiny of state and even India in its pledge has confirmed to honour and seek the people’s verdict through plebiscite.

Despite being signatory to these resolutions, India backtracked from its commitment, said JRL and is not providing this opportunity to people of state.

“We oppose all these celebrations, leadership said and added the main reason is their deceit and mockery with democracy. Pro-freedom leaders stressed, school going children, their parents and teachers to stay away from all these celebrations and asked to realize their obligations towards nation”, JRL statement reads further.

Joint leadership expressed their anguish over the reports of preparation by a few institutions for republican day and asked to refrain from this and said that it will have serious implication over our freedom movement.

Meanwhile the joint leadership has reaffirmed appeal for complete shutdown of 25th and 27th January in Handwara and Kupwara towns respectively to pay homage and tributes to the martyrs of 25 January 1990 Handwara and 27 January 1994 Kupwara massacres. They further appealed for a thorough and impartial probe of all these unfortunate incidents of mass killings by world human rights bodies.