Chennai: Leader of opposition in Tamil Nadu state assembly and working president of DMK party M.K Stalin while strongly criticising the BJP led Central government stated that it was trying to relegate people who don’t speak Hindi to second-class citizens, and of pushing the sub continent into becoming “Hindia”.

In a video message released by his office Saturday night, the DMK leader while targeted PM Narendra Modi, reportedly said that from the day he took charge, his government has repeatedly tried to impose Hindi and Sanskrit in many forms. “And these efforts have started to disturb the peace, and damage the unity of this Indian Sub Continent.”

While quoting the recently approved  117 recommendations by parliamentary committee in which it is stated that MPs and Union ministers who know Hindi to use it as their official language, both in speech and writing, Stalin said, “The urgency and focus with which this ordinance for use of Hindi as an official language has been passed is a clear indicator of where the government’s priority lies.” He also reminded the Centre that it hasn’t accepted Tamil Nadu’s demand for exemption from NEET, the medical entrance exam, reads a quote from a report published in an English vernacular. 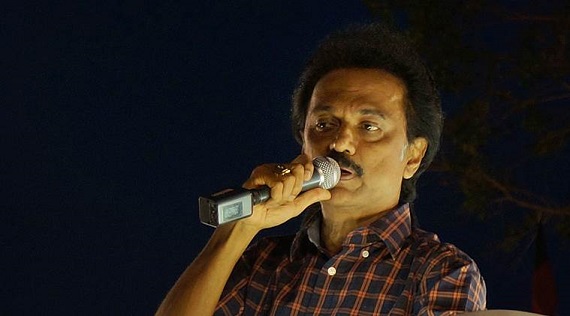 Furthermore, in his video address he purportedly said that the BJP-led government has obtained the President’s permission for use of Hindi in airport announcements, press news advertisements, “and going a step further, has made Hindi a compulsory subject for CBSE schools across the country. Indian PM Modi’s promotional campaigns are exclusively in the Hindi script even when the words pronounced are in different languages”.

Moreover, instead of translating the names of programmes and schemes, the government insists on transliteration, which makes the names meaningless for many people of the sub continent, he said. He cited the example of Swachh Bharat Abhiyan, which is the name of the programme across languages, “instead of ‘Thuimai Indhiya’ [in Tamil] or translations in other languages, which would have instantly carried a meaning for the whole of the sub continent”, notes Indian Express (IE).

Categorically, sharing  his concern to the non Hindi speaking people he stated that this is not an exception but the rule. “All the central government’s cesses and schemes are named only in Hindi or Sanskrit and then transliterated into other languages. Even Teacher’s Day has been recently named Guru Purnima. Recently, milestones on inter state highways were re-lettered in Hindi with the removal of English, which is universally recognisable,” he adds.

“I urge Indian PM Modi’s government to give up these efforts of sidelining non-Hindi speaking citizens I condemn the efforts taken so far in this pursuit, on behalf of the DMK and all non-Hindi-speaking citizens of the country,” reads a quote from the statement of  M.K Stalin published in an English print.

Media sources further indicate that while cautioning the central government he recalled that  Tamil Nadu has always stood up to the domination of an external language over the state’s mother tongue. “I would like to remind the central government that the Dravidian movement has a long history of spearheading struggles against imposition of Hindi and has a tradition of martyrdom, martyrs who laid their life during the anti-Hindi agitation. I sternly urge the Centre not to sow the seeds for the emergence of third generation, anti-Hindi-imposition protests through brute force, pushing India into becoming Hindia,” M.K Stalin further added to his statement.