Kotkapura: As per information Sikh pracharak Baba Ranjit Singh Dhadrianwale has been arrested by Punjab Police at the peaceful protest in Kotkapura, along with Jaskaran Singh Kahan Singh Wala and many other Sikhs who had gathered for a peaceful sit-down protest against the recent Beadbi of Guru Granth Sahib Ji.

A press release by PD Network says that [a]fter the Diwaan at Kalanwali, Baba Ranjit Singh went straight to the peaceful protest, but masses of police officers began to appear shortly after their arrival and made arrests.

“Sikhs no longer peacefully protest for their rights in Punjab. Panthic Parcharaks are being silenced from raising their voices to speak the truth” the press release reads further. 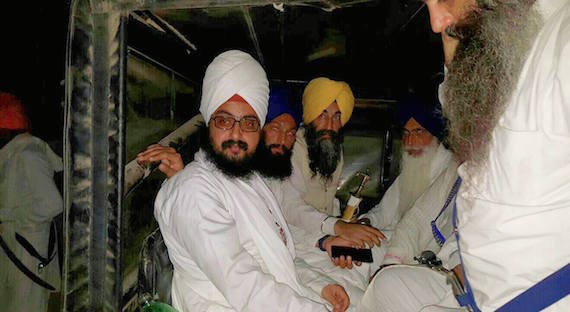 “In the most disturbing series of events, it has emerged the authorities did not take letters from the “Premi’s” of the Dera Jhoota Sauda seriously, where a challenge was made to the Panth in anger over the protest by Sikhs of their blasphemous Baba’s MSG-2 film release across Punjab”, it reads further.

It is notable that there had been many disturbing incidents in Firozepur-Faridkot-Mukatsar belt in recent days that has led to repeated tensions in this region. Sikh organisations have been accusing police for taking no action against culprits who commit beadbi of Guru Granth Sahib.

Recently, a Saroop of Sri Guru Granth Sahib Ji was stolen from a Gurdwara at ‘Burj Jawahar Singh Wala’ village and later letters were found from the Dera Sauda Sirsa follower’s boasting that they have the Saroop hidden at village Bargari, and they will reward anyone who finds it. The letter was widely circulated in the media. No firm police action was reportedly taken.

It then emerged that torn sacred Angs of the missing Guru Granth Sahib Ji Saroop had been found in the alleyways of Bargari village. This triggered a mass peaceful sit-down protest at Kotkapura in which more than a thousand Sikhs participated, with many more arriving last night.