Amritsar Sahib: To vent their anger against the successive Indian governments for failing to deliver justice to the victims of genocidal attack on Sikhs in Nov 1984, the Sikh Youth of Punjab (SYP)- a youth body of  Dal Khalsa- has resolved to organize a protest rally in Amritsar city on Nov 2. To pay homage to those who were killed in November 1984, ardas will be performed at Akal Takhat Sahib. The decision was taken at a meet of office bearers of the youth body. 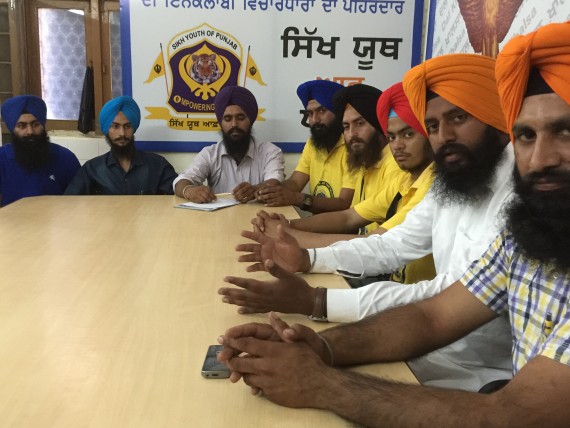 Paramjit Singh Tanda while Chairing a meeting with other youth leaders

Informing the media, SYP head Paramjit Singh Tanda and senior activist Paramjit Singh Mand said the hopes of justice from the Indian state has almost died as all arms of the state conspired and carried out a well-planned, and well-orchestrated killings of the Sikhs in Nov 1984 at Delhi and elsewhere. They said their activists would stand in queue with placards and flags in hands for few hours at Bhandari bridge and then march towards Darbar Sahib. They however clarified that road traffic would not be disturbed.

They criticized the media for repeatedly terming the “almost genocide” as riots. They said heads of both Dal Khalsa and SAD (Panch Pardani) would address the demonstrators.

They said the aim of the protest was to shame the rulers of the country as they had failed not only to provide justice but also to provide a resolution to the Sikh conflict. They said both Congress and the BJP were two sides of the same coin as both had played the politics of genocide and their hands were dipped with the blood of innocents.

The effected families of those Sikhs who were brutally murdered in the capital of the country have lost all hope for justice and their festering wounds have consumed them. “Thirty-one years have gone by and the killers of Sikhs had not been punished for their role in the genocide”.