Davis, CA: Oct. 19, 2016: As he took the podium at Central Park in California’s City of Davis to unveil a statue of Hindu preacher Mohandas Gandhi, Mayor Robb Davis asked the bronze sculpture: “What are you, Mr. Gandhi?”

While hundreds applauded, the Sacramento Bee reports approximately 75 protestors decried the statue, which was paid for by the Indian government. Even the mayor expressed some skepticism as he spoke at the ceremony, asking: “Are you merely a symbol? Currency in a patron/client exchange? Brand India? A god revered by some? A scapegoat hated by others? What will you do here, Mr. Gandhi?”

“It began as a peaceful ceremony in Davis today, celebrating a new statue of Mahatma Gandhi, the man who changed the world with his philosophy of nonviolence and civil disobedience,” reported Mike Luery of KCRA News 3. “Welcome to Davis, Mr. Gandhi,” said Mayor Davis. Yet, said Luery, “Today’s event was repeatedly interrupted by protestors.” 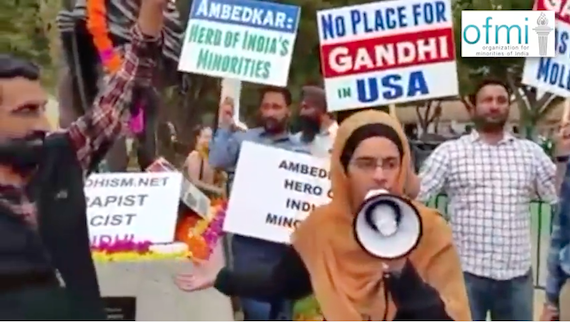 A view of protest against Gandhi Statue in California, USA

Speaking to protestors through a bullhorn as they surrounded the statue, holding signs reading “No Place for Gandhi in USA” and “Gandhi Was A Child Molester,” former UC Davis student Punit Khalsa exclaimed: “To put a statue of Gandhi in Davis — it makes no sense!”

Bhajan Singh, the founding director of Organization for Minorities of India (OFMI), spearheaded a campaign in August to oppose installation of the statue. At an August 30 city council meting, two of five council-members — the mayor and mayor pro tempore — voted in favor of OFMI’s request for reconsideration. At the meeting, Bhajan argued that because the city hosts the University of Davis, a “Public Ivy,” it’s an “international house” that must consider the issue as “beyond Davis.” 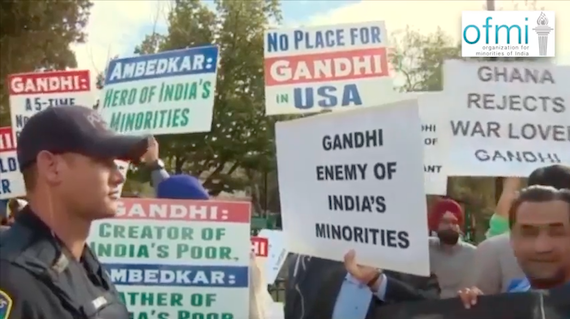 Another view of protest against Gandhi Statue in California, USA

Using a bullhorn as protestors rallied around him to demonstrate against the unveiling ceremony, Bhajan pleaded with statue supporters: “Gandhi is a five-time Nobel Peace Prize reject! A warmonger, a racist, a sex-offender. He is rejected by India’s majority of the population. We beseech the Americans, we beseech those who are ignorant. Wake up to Gandhi’s reality. Reject Gandhi!”

“We are against Gandhi, who was the prelude, the father of apartheid,” announced Bhajan. “His racism. You cannot close your eyes to his racism.”

Interviewed by KCRA, protestor Brahamdeep Kaur explained: “I don’t understand why America is supporting him when America stands for freedom and Gandhi is not the ideal person for freedom.”

Continuing to plead with attendees of the ceremony, Bhajan insisted: “Google ‘Ghana Gandhi statue protest’. Your heads will hang down in shame at what Gandhi has done. He’s the father of apartheid. Why are we celebrating this racist person? Have you no shame?”

“If you have any doubt what kind of man Gandhi was, go ask the South Africans,” said Punit Khalsa. “Ask the Sikhs. Ask the Dalits. Ask any oppressed minority in India that is now in a division of power called the caste system. Gandhi supported the caste system!”

KCRA’s Luery reported: “Protestors tried shouting down the ceremonial speakers, including the Consul General of India, who tried playing to the crowd.”

Local attorney Amar Shergill suggested the statue is a form of propaganda, telling KCRA: “They would like to perpetuate this Hollywood version of Gandhi so you pay no attention to the fact that Americans here are supporting the brutalization of minorities back home.”

“So the fact that academics — learned academics — are supporting a known sexual predator, someone who was denied the Nobel Peace Prize, is a shameful thing for me as a previous student of UC Davis,” said the outraged Khalsa.

Gandhi’s status as an international peace symbol was repeatedly challenged, as Bhajan stated: “Gandhi was rejected not one time, not two times, not three times, not four times, but five times by the Nobel Peace Prize society. Bless them for having the courage to do what’s right.”