Chandigarh: The Punjab assembly today passed a legislation to de-acquire and de-notify the land acquired from farmers for construction of controversial SYL Canal. The assembly passed the bill (titled “The Punjab Satluj Yamuna Link Canal Rehabilitation and Revesting of Property Rights Bill 2016”) clearing the return of 3928 acres of land to the farmers.

The Congress party also supported the bill. Before the passing of the bill the Congress objected to include their demand for free return of the land to the original owners from who the land was acquired more than three decades ago.

The state government and leading political parties had made it clear that Punjab will block any move by the central government to force the state to share more water with other states, especially Haryana. 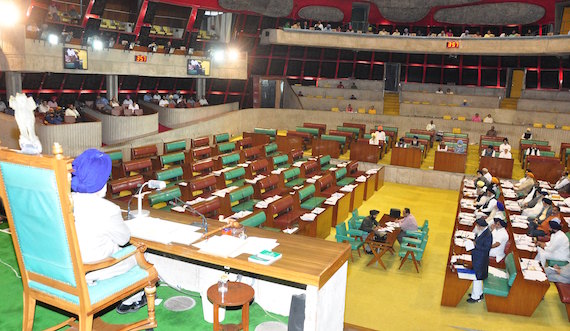 As per section 1of the Bill passed today [t]his Act may be called the Punjab Satluj Yamuna Link Canal Land (Transfer of Proprietary Rights) Act, 2016.

The preamble of the Act reads: “A Bill to provide for transfer of proprietary rights to the land owners from whom land was acquired by the State Government for construction of Satluj Yamuna Link Main Canal and for the matters connected therewith or incidental thereto.

Whereas the State of Punjab as a sovereign authority in federal structure of the Constitution of India and being a welfare Sate of the Union of India takes great pride to protect the interests of its inhabitants.”

“Notwithstanding anything contained contrary in any law for the time being in force, on and from the commencement of this Act, the proprietary rights on the land shall stand transferred to the land owners on such terms and conditions as the State Government may notify” reads section 3 (1) of the Bill.

“The record of rights shall stand amended and automatically modified by the concerned revenue authorities” reads subjection (2) of section 3 (titled: Transfer of Land).

Section 6 of the Bill reads: “No suit, prosecution or other legal proceedings shall lie against the state government or any person for anything which is done in good faith or intended to be done in pursuance of this Act or of any rule or order made there-under”.