A release issued by the Chief Minister’s Office (CMO), copy available with the Sikh Siyasat News (SSN) reads: “In a major breakthrough, Punjab Police has traced the grenade attack on Nirankari Satsang Bhawan in Amritsar to ISI-backed Khalistani forces in Pakistan, by arresting one of the two perpetrators of the attack in less than 72 hours after three persons were killed and 15 injured in the terror act” (sic). 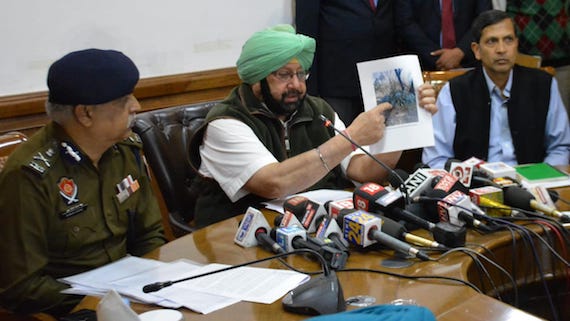 He maintained that Bikram Singh is an operative of Khalistan Liberation Force (KLF) and he “has given significant information indicating that the grenade was provided to the assailants by one Happy in Pakistan” (sic).

“Happy is suspected to be the Pak based KLF Chief, Harmeet Singh Happy @ Ph.D, who had earlier masterminded the conspiracy to carry out the targeted killings of RSS/Shiv Sena/DSS leaders and workers (and a Christian Pastor) in Ludhiana and Jalandhar in 2016-2017, in active collaboration with Pakistani establishment and the ISI”, the statement issued by CMO reads.

The statement further reads: “The Chief Minister categorically ruled out any religious motivation behind the attack” (sic).

“Giving details, the Chief Minister said that preliminary investigations and CCTV footage of the incident had led to the arrest of Bikram, who has identified his accomplice as Avtar Singh Khalsa (32 years) s/o Gurdial Singh, r/o village Chak Mishri Khan, Lopoke (Ajnala), Amritsar”, the statement by CMO reads further.

As per the statement, “Punjab DGP Suresh Arora said Bikram was riding a motorbike (TVS PB-18 M- 7032) at the time of his arrest. Bikram’s black Bajaj Pulsar motorcycle (PB-02-BF9488), which he has used in the attack, has also been recovered” (sic).