The Homi Bhabha Cancer Hospital in Sangrur has been established in association with the State Government, which has also planned a state-of-the-art Oncology Training Centre at the newly inaugurated hospital, said the Chief Minister, who was accompanied by Health Minister Brahm Mohindra and PWD Minister Vijay Inder Singla.

The Chief Minister also launched a Cancer Prevention Programme for Sangrur district, under which intensive health education on the risk factors and preventive measures of the disease (Cervix, Oral and Breast Cancer) and easy access for diagnosis and treatment, would be provided to the people at their doorsteps. 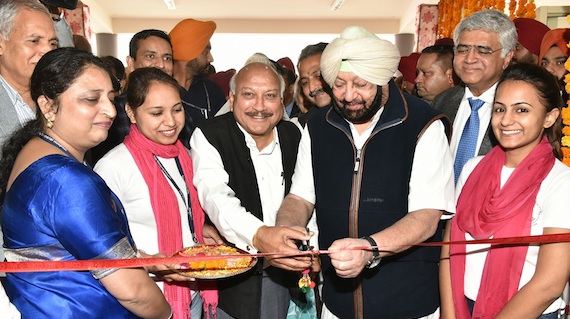 The Chief Minister, who later reviewed the 300-bedded Tata Cancer Hospital being constructed at Mullanpur near Chandigarh, said the facility be made functional with in a year. He directed the concerned officials to expedite the construction of the hospital.

CM further said that a tertiary cancer care centre at Fazilka was being constructed at a cost of Rs. 29 crore, which would be operational by September 2019. Besides, a Rs 114 crore State Cancer Institute would be set up at Amritsar. The Chief Minister also announced Rs. 7 crore for Sangrur Civil Hospital.

Accompanied by Brahm Mohindra and Vijay Inder Singla, the Chief Minister also went around the new Cancer Hospital to check out the facilities, and interacted with doctors and other medical staff.

The health minister said the Punjab Government had taken concerted steps to strengthen the healthcare facilities and infrastructure in Government hospitals. He said that 588 doctors would shortly be joining the health department, and they would be posted near their residential places to enable them to render their whole-hearted services to the patients. The Minister also said that all tests of Tuberculosis and Hepatitis-C besides Dialysis facility were being provided free of cost in all 22 Government hospitals. He disclosed that the Government was working on a Clinical Establishment Act to regulate the services of private hospitals.

Singla recalled his maiden meeting with Director Tata Memorial Hospital Padma Shri Dr. R.A. Badwe on the directions of the then Prime Minister Dr. Manmohan Singh for establishing cancer hospital in Sangrur. He said the hospital would provide 66 percent subsidy on medicines, tests on nominal rates, and free treatment after detection of disease.

Dr. R.A. Badwe, in his address, said the Homi Bhabha Cancer Hospital had been running five B.Sc courses through Baba Farid University of Health Sciences and one Master of Science in Histopath was being added from this academic year. He further added that B.Sc ICU and Diploma on Oncology Nursing will be added from next year.

On the occasion, the Chief Minister also honoured Anup Gupta from HPCL, Charanjit Singh of HMEC, Ravinder Singh Nanda of IOC, Munish Garg and Anoop Singla for their services for the welfare of cancer patients.

Meanwhile, reviewing the progress of the Mullanpur hospital in Chandigarh later, the Chief Minister assured the Director of Tata Memorial Hospital Mumbai of all support and assistance to ensure timely completion of the Rs. 664 Crore project.

Expressing concern over the high incidence of cancer in the state, especially in southern Punjab, the Chief Minister asked Dr. Badhwe to further intensify their efforts to prepare database of cancer patients suffering from various types of cancer, with early screening to ensure timely detection and treatment.

Captain Amarinder Singh also asked the Health Minister Brahm Mohindra to explore the possibility of engaging companies supplying medical equipment and infrastructure to the Government hospitals free of cost to further augment state’s efforts to ensure affordable and hassle-free treatment to the poor and needy. He also asked the Health Minister to rope in various philanthropic, NGOs, religious and social organisations for this purpose.