Bathinda, Punjab (February 04, 2012): The complainant in a case against Dera Sauda Sirsa (DSS) head Gurmit Ram Rahim informed a local court yesterday (February 03) that the Punjab police had presented a fake affidavit in his name to seek quashing of the case.

A case under Section 295A of Indian Penal Code was registered against Dera Sauda Sirsa head Gurmeet Ram Rahim following a complaint from Rajinder Singh Sidhu, a local leader of the Shiromani Akali Dal, for hurting religious sentiments of Sikhs in 2007. DSS head had deliberately attempted to personify tenth Sikh Guru Sri Guru Gobind Singh Ji, a practise which is strictly prohibited in Sikh tradition. Dera head is also facing charges of murder, rape, sexual abuse and land grabbing in the State of Haryana. 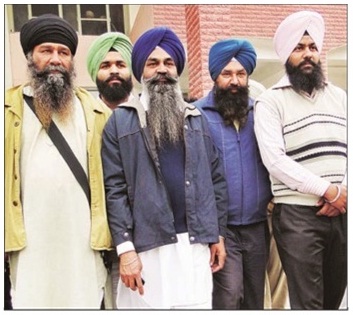 Complainant Rajinder Singh along with Baba Hardeep Singh Mehraj and others outside Bathind court on Saturday (February 03, 2012)

It is notable that the Punjab ruling party Shiomani Akali Dal (Badal), also known as Badal Dal, has totally collaborated with the Indian state and anti-Sikh deras patronized by the State. As per claims made by dera sources in media Badal Dal submitted in writing to help dera to get police cases quashed and requested dera to help it’s candidates in elections.

Just three days before polling for the 2012 assembly elections in Punjab, when various political parties were busy wooing the dera head for votes, the police forwarded a case-closure application in the court here.

As per Rajinder Singh Sidhu’s complaint, the dera head had held a congregation at Salabatpura village in Bathinda district, wearing an attire similar to that of Guru Gobind Singh.

It is notable that police had registered case against dera head due to mass mobilization of Sikhs against Dera in May 2007 but police did not make any attempt to arrest the dera head. No charge-sheet was filed against him even after lapse of almost five years.

Now, the police is claiming in the court that there was no evidence to prove that any such function was held at Salabatpura, where as photos and detailed the concerned function were published by various newspapers on May 12, 2007.

Shiromani Akali Dal (Panch Pardhani), a Sikh political party that led mass movement against DSS notorious activities from 2007 to 2009, last year had smelled the foul being cooked by Punjab government in wake of 2012 assembly polls. Panch Pardhani leaders Advocate Jaspal Singh Manjhpur and Baba Hardeep Singh Mehraj had moved an application to Bathinda court to seek directions to police to present charge-sheet against DSS head. This application was accepted and now these Panch Pardhani leaders are also included as complainants in this case.

Advocate JS Manjhpur informed “Sikh Siyasat” that suspecting foul play by Punjab government, the Panch Pardhani decided to secure legal involvement in this matter to make it difficult for Badal Dal and Punjab government to manipulate court proceedings to fulfil their ulterior motives.