Chandigarh: Facing strong criticism from academics and political circles over the issue of distortion of facts and removal of chapters on Sikh history from Punjab School Education Board (PSEB) class XII book, the Punjab chief minister Capt. Amarinder Singh today announced the constitution of a 6-member Oversight Committee to examine the recommendations of the 2014 panel that had reviewed the History syllabus and to oversee all history books in the future.

The committee will be headed by historian Prof. Kirpal Singh.

The Chief Minister said his government had decided to setup a permanent committee to oversee the process of formulating the syllabus and ensuring error-free books on the subject.

The statement issued by Punjab CM office says that the chief minister dismissed the controversy over the PSEB class XII history book while maintaining that the decision to review the syllabus and print books in alignment with the NCERT syllabus was taken during the SAD-BJP rule back in 2014. 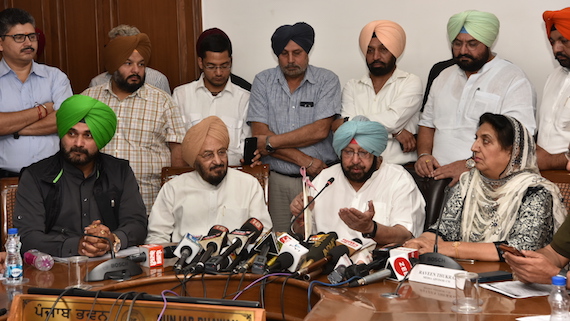 “In fact, there were no History books earlier and what SAD president Sukhbir Singh Badal was citing was merely a guide”, said Captain Amarinder at a press conference here.

In contrast to facts put forward by those criticising the government, the Chief Minister once again claimed that there had been no deletion of syllabus relating to the Sikh Gurus, and the entire history of the Gurus, starting from Baba Banda Bahadur, had been incorporated in chronological order in Class XI and XII syllabus.

“The committee has been mandated to consider and report on the recommendations of the Expert Group constituted by the Punjab School Education Board in 2014, to review the changes made in the new History syllabus prescribed for classes XI and XII subsequent to the recommendations of the Expert Group, and to suggest corrections, if any”, a statement issued by Punjab CM office reads.

The statement further states that the Committee has been further asked to examine the contents of the text books prescribed for classes XI and XII and to suggest corrections for factual and other errors, if any, and to align, as may be practicably possible, the History syllabus with that prescribed by the NCERT.

Apart from these, the committee has also been directed to exercise oversight over the syllabus and contents of textbooks prescribed for History for all classes in the Punjab School Education Board and to ensure that there are no factual discrepancies.