In this Seminar, Governor Sh. Kaptan Singh Solanki said that, it is high time to check, whether we are following the real parliamentary democracy approach and to walk on his footsteps, it is equally important to remove and abolish the inequality on the basis of casteism, then only we can progress not only in terms of parliamentary democracy but also with social democracy. Babasaheb made the constitution, understanding the need of overall development of the people. 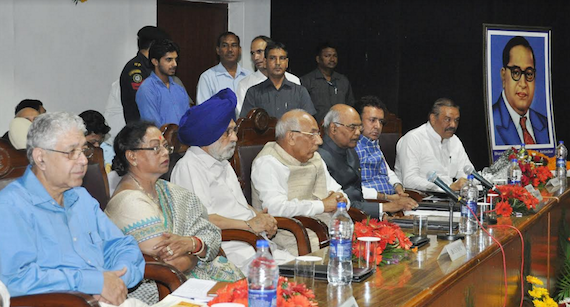 He said, Babasaheb himself faced the inequality since his childhood and once a bullockcart driver hurled him because of his caste. Even after such a struggling life, nobody dared to stop Babsaheb’s progressive thoughts. He said, it is our ethical duty to walk on the footsteps of Babsaheb for people’s overall development.

He further said that like, in our life we follow Gita, and in our family we follow Ramayana just like that for our country we need Babasaheb’s constitution. Dr. Charnjit Singh Atwal, Speaker Punjab Vidhan Sabha said, that after researching about the constitutions of different nations, felt that democratic constitution is what India needs as it was even prevalent during Mahatma Budha’s period. He further said that, we can only fulfill the dream of Babasaheb by not only implementing “Right to Education” but also “Right Education” so that every child gets fair and equal opportunity to study.

Union Minister, Vijay Sampla also said that, Babasaheb even after studied from Foreign Universities, he has many golden opportunities to work in any part of the world, but he served our country for the welfare of the poor, women and labourers.

Dr. Ambedkar felt the need of Reserve Bank of India, for Power National Grid, helped in constructing Bhakra and Damodar Dam. Reserved the working hours for 8 hrs for labourers, maternity leave for women, Right to vote and Right to equality raised his voice and gave us the rights. Governor of Bihar Sh. Ram Nath Kovind said that Babasaheb is the architect of modern India, Country’s guru with prudent approach and has been in our hearts that for every problem we have to follow Babasaheb’s approach. Babasaheb was the first to do PhD in Economics and Asia’s first to complete double PhDs.

Chowdhary Zulfkar Ali, Cabinet Minister, J&k said that, today our weaker section is enjoying their rights and his prudent approach was ahead of his time.

Babasaheb experimented from his Buddha’s approach, that how the assembly in Buddhism worked, seating arrangements to voting through Ballot were few examples which taught him to construct such a big constitution.