Chandigarh: Punjab Chief Minister Captain Amarinder Singh on Monday (June 25) announced to pay the full compensation amount of Rs. 4.5 crore to the Jodhpur detainees if the Centre fails to come out with its share.

A press statement issued by the Punjab government states that the Chief Minister made this clear after a telephonic conversation with Central Home Secretary Rajiv Gauba, whom he had called up to urge for early resolution of the matter in view of the prolonged suffering of the detainees, who were arrested and detained in the Jodhpur prison in June 1984.

Notably, in June 1984 the Indian army had attacked the Darbar Sahib in Amritsar and various other Sikh Gurdwaras in Punjab and adjoining states. Many Sikhs who were detained by Indian forces after the army attack were kept in Jodhpur jail in Rajasthan. 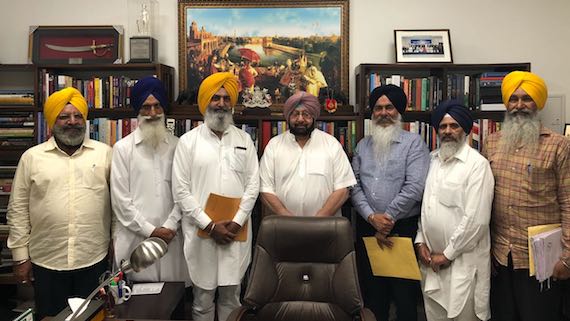 Expressing the hope that the Centre would be forthcoming with its 50% share of the compensation awarded by the court to the detainees, the Chief Minister said that if, for any reason, the Central Government fails to pay its share then the State Government would take over the entire liability and ensure that the detainees get thee much-delayed justice.

The Centre should immediately withdraw its appeal in the Punjab & Haryana High Court against the compensation, said the Chief Minister, adding that if the central government fails to come to the rescue of the detainees, then the state government will pay the full amount of the compensation.

As per the statement the Chief Minister had last week written a D.O. letter to the Indian Home Minister, pointing out that the central government’s appeal against the compensation, which the court had held to be jointly payable by the Central and State governments, had evoked a strong reaction amongst the Sikh community. It was further likely to lead to an avoidable sense of alienation and perceived injustice among the community, the Chief Minister warned.

“Around 300 persons were arrested and detained in Jodhpur jail in the wake of Operation Blue Star, and were later released in three batches, between March 1989 and July 1991. Of these, 224 detainees had appealed for compensation in the lower court, alleging ‘wrongful detention and torture’ but they failed to get any relief from the court in 2011”, reads the statement.

However, 40 of the detainees went in appeal to the District & Sessions Court, Amritsar, and were awarded Rs. 4 lakh each as compensation with 6% interest (from the date of filing of the appeal to payment of compensation) in April last year. The total compensation, including interest, worked out to Rs. 4.5 crore rupees approximately, the Chief Minister pointed out.

The court had held the Central and the State Governments as jointly liable for payment of the compensation, and although the Punjab government had given an undertaking to the court to pay half the amount, the Central Government had moved an appeal in the Punjab and Haryana High Court against the order.

The Chief Minister, who has been pursuing the Centre to retract its appeal and contribute its 50% share towards compensation, had been approached by a delegation of the detainees two days ago. He had assured the detainees of his government’s all-out efforts to ensure justice for them.