Chandigarh: Punjab cabinet held a special meeting yesterday to discuss measures to be taken to curb the drugs menace in state. According to a press release by CMO, the Punjab government has decided to make a proposal for providing capital punishment (death penalty) for drug paddlers. The government also announced to form certain review committees to take stock of situation in the state. The cabinet meeting was held in the backdrop of drugs related deaths across the state. Concerned Punjabis have began “Black Week Against Chitta” to press Punjab government to initiate action in drugs issue. 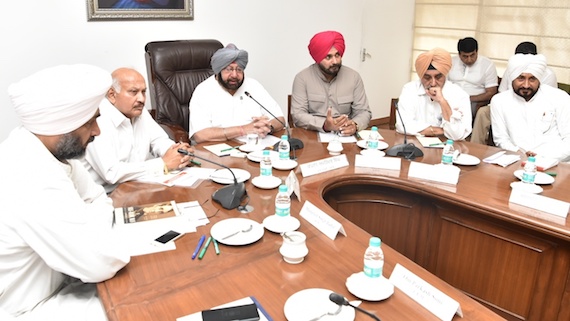 A scrutiny of legal provisions related to drugs trafficking reveals that Punjab government’s proposed deterrent measure does not hold much water as the NDPS Act (Narcotic Drugs and Psychotropic Substances Act) already provides for death penalty in certain cases.

Soon after the announcement by Punjab cabinet, Advocate Jaspal Singh Manjhpur took to Facebook and posted text of Section 31A of the NDPS Act which details the offences punishable with death sentence.

Text of Section 31A of NDPS Act reads:

Provision of Death sentence is already in NDPS Act..

31A. Death penalty for certain offences after previous conviction

(a) Engaging in the production, manufacture, possession, transportation, import into India, export from India or transhipment, of the narcotic drugs or psychotropic substances specified under column (1) of the Table below and involving the quantity, which is equal to or more than the quantity indicated against each such drug or substance, as specified in column (2) of the said Table:

(viii) Any mixture with or without any neutral material of any of the above drugs – 1,500 grams

(xiv) Salts and preparations of the Psychotropic Substances mentioned in (ix) to (xiii) – 1,500 grams

(b) Financing, directly or indirectly, any of the activities specified in clause (a), shall be punishable with death.

(2) Where any person is convicted by a competent court of criminal jurisdiction outside India under any law corresponding to the provisions of 3[section 19, section 24 or section 27A and for offences involving commercial quantity of any narcotic drug or psychotropic substance] such person, in respect of such conviction, shall be dealt with for the purposes of sub-section (1) as if he has been convicted by a Court in India].

Former DGP Shashi Kant said the Punjab government’s move was just a political ploy to push the ball in the court of the Central government. “Now, the blame game will start. The present set of laws is adequate. The core issue is to arrest drug lords, which no government seems ready to do”, he said while referring to cabinet announcement to propose death sentence for drug paddlers.

WHAT’s USE OF PROVIDING DEATH PENALTY WHEN GOVT. UNABLE TO ARREST DRUG LORDS:

A report in The Tribune quotes  sociologist, Prof. Rajesh Gill of Panjab University, Chandigarh, saying: “The death penalty would come into force only if charges are proved. It seems that powerful and politically connected persons are running drug rackets. I wonder if they would ever be arrested. We need to have a holistic and positive solution”.

GOVT. HAS SO FAR NOT SHOWN A SINCERE EFFORT TO COMBAT THE PROBLEM: Advo. Navkiran Singh

Advocate Navkiran Singh too feels that the capital punishment won’t help. “The state has so far not shown a sincere effort to combat the problem. The government has not even called an all-party meeting or sought suggestions from the public to devise a viable solution. Around 142 nations have already abolished death penalty and no democratically mature nation believes in it.”