Amritsar/ Bathinda: The Punjab police is reported to have arrested leaders and activists of various Sikh organisations in wake of ‘half-day’ symbolic Punjab shut down call by some Sikh organisations. The call was given by United Akali Dal (UAD) and Shiromani Akali Dal Amritsar (Mann) in order to show their protest against Punjab government’s alleged efforts to control and use Sikh institutions for it’s ulterior motives. 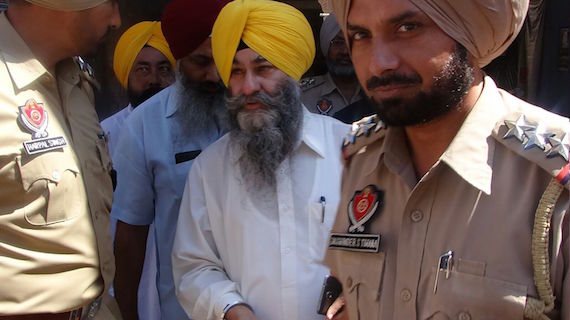 According to sources from Bathinda, the district police had rounded up United Akali Dal (UAD) leader Gurdeep Singh Bathinda in his home this morning but he was able to break the police circle to reach at Gurduara Singh Sabha with his supporters from where he was arrested by the police.

As per information Baljeet Singh Ganga, Sukhdev Singh Joganand and Baba Chamkaur Singh Bhai Roopa were arrested from Gonianna along with other activists of Ek Noor Khalsa Fauj.

The shut down call reportedly triggered mixed response in Bathinda.

SAD Mann leaders from Patiala have alleged that the police forced local shopkeepers to keep their shops open. The bandh failed to trigger any response in Mohali.

More details about impact of Punjab bandh call were awaited at the time of writing this news.

It is pertinent to mention here that organisers of the Punjab bandh had declared to exempt health and education services from Punjab shut down call.