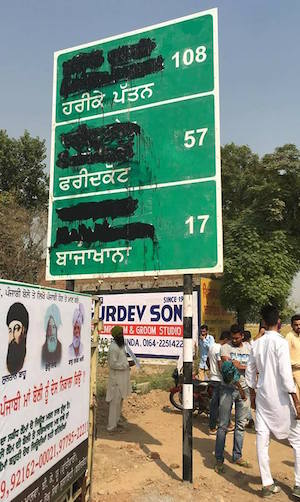 Notably, activists of various organisations on October 21 undertook a massive drive to black paint Hindi and English signboards on Banthida-Faridkot Highway in order to highlight their demand seeking prominence to the Punjabi language. The protesters smudged signboards on about 25km stretch of NH-15. A case for prevention of damage to public and private act has been registered against leader of Malwa Youth Federation Lakhbir Singh alias Lakha Sidhana, Dal Khalsa leader Bhai Hardeep Singh Mehraj and around 70-80 unidentified persons in this connection at Nehianwala police station.

The police, however, could not arrest Lakha Sidhana or Bhai Hardeep Singh as they were not present at their houses at the time of raids.

Speaking to the Sikh Siyasat News (SSN) over phone Bhai Hardeep Singh condemned the move of Amarinder Singh led Congress government in Punjab. He said that the Punjab government and the Punjab police were trying to create fear psychosis by registering the case and by holding police raids.

“Instead of introspecting and ensuring primacy of Punjabi language, Amarinder Singh led Punjab government is trying to arrest those who are raising concerns for the mother language but such ‘cheep tactics’ can’t hold us from raising voice against conspiracy to marginalise the Punjabi language.