Amritsar: The mis-use of sedition law was indirectly admitted by the Punjab government and the Amritsar police as the police finally annulled the First-Information Report (FIR) registered against organisers of the Panthic Gathering at village Chabba on November 10, 2015 that was termed as “Sarbat Khalsa 2015”. 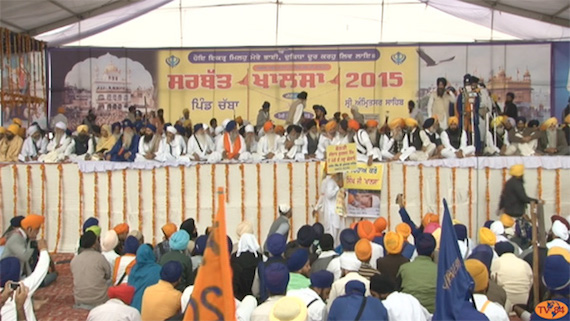 The Chatiwind police had booked 20 people under sections 124-A (sedition), 153-A (promoting enmity between different groups on grounds of religion), 153-B (assertions prejudicial to national-integration), 115 (abetment of offence punishable with death or imprisonment for life), 117 (abetting commission of offence by the public or by more than ten persons), 120-B (criminal conspiracy) of the IPC and section 13 (1) of the Unlawful Activities Prevention Act 1967 and Section 66-F of the Information Technology Act.

The case FIR reportedly discarded on the directions of a commission appointed by the Congress party led government in Punjab to review the cases registered for ‘political reasons’ by previous SAD (Badal)-BJP led government.

SSP Parampal Singh has reportedly confirmed that the FIR had been quashed as per the recommendation of the justice Mehtab Singh Gill commission. He added, “The report of annulment of the FIR has been sent to the commission.”