Chandigarh: Giving details on incidents of gunfires and clashes during February 04 polling in Punjab, V.K Bhawra ADGP and Nodal Officer for elections said in a written statement that an incident of firing has been reported from Lalu Ghuman in Tarntaran assembly constituency where scuffle took place between supporters of two rival groups over the issue of fake votes of some voters. Firing was reported in which one Jagjit Singh got injured in his leg. FIR was registered at Police Station Jhabal against the Sarpanch of the Village. Polling, however, did not get disrupted.

Another similar incident occurred in village Ruppawali polling station in assembly constituency of Fatehgarh Churian where two rival political parties entered into the tussle over the biased role of the presiding officers regarding casting of fake votes. One of the candidates demanded change of presiding officer but refused to give it in writing. No one was injured. 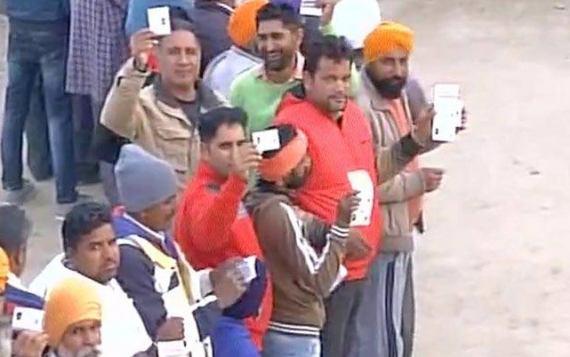 Adding further V.K Bhawra said that in Dera Baba Nanak in District Gurdaspur a dispute arose between supporters of two candidates over allegedly casting of fake votes which resulted In injury to two persons namely Shamsher Singh and Kulwant Singh both residents of Padda.

An incident of firing in air has also been reported from Guru Harsahai Assembly Constituency in the afternoon. Preliminary investigations are on.

Another incident occurred in Zirakpur where two unknown persons scuffled at Village Lohgarh in Zirakpur area of Derabassi Assembly Constituency of district Mohali. Later one of the candidates reached the spot and said that there was firing on his supporters. SP (D) was near the place of occurrence, he verified through local people but firing incident was not substantiated. There was no impact on polling, added V.K Bhawra.